Travis Wilson expands his popular two-hour radio show talking prep football on Friday night from Milwaukee and Madison to all major radio markets in Wisconsin this fall. As live as it gets the show streams on WisSports.net and fans, coaches and athletes report scores and big plays from around the state, with on site announcers at many big games being patched into conversation throughout the show. Big upsets, rising talent, and the pulse of Wisconsin football excitement from our smallest rural farm towns to the Milwaukee metro. 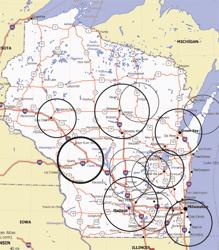 Cover all  your radio sports bases in one effort, with the year-round Wisconsin Sports Minute. Broadcasted in every corner of the state (24 stations), the Wisconsin Sports Minute is a fantastic history nugget on this day in Wisconsin sports -- from Brewers, Badgers, Packers and Bucks to Olympic moments and high school highlights for the record books; the WSM has something for every sports fan. (Heavy adult male demographic.)
Housed on WisSports.net -- the state's leading prep resource -- we can build out this subsite area for ongoing brand engagement to include social media plugins and even sports trivia or listener/viewer poll questions, (Heavy parent demographic).

The feature is a nugget on this day in Wisconsin sports history, featuring Bucks, Brewers, Badgers,Packers and more. The formats of the respective stations run the gambit with a heavier emphasis on sports stations with some representation on rock, pop, oldies and mix stations as well.

The feature can be packaged to include frontpage positioning on WisSports.net and a subsite area build out that can include everything from social media plugins to Wisconsin Sports Trivia polls.

-Great time slots during popular morning talk shows.
-Stations contracted to run 1-2 x daily, w/ stations reporting up to five times per day.
-Estimate of spots running daily: 40-50
-Additional feature exposure on the frontpage of WisSports.net; 4-5 million per year included (depending on packaging)
-Only all encompassing pro/amateur sports feature that runs the full year.
-Map circles show 1-3 broadcasting stations each, with lightest circles showing one broadcasting station, medium 2, and darkest 3. (A few additional stations have been added since this map was created.)