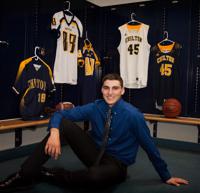 Football Honors: Three-year varsity letter winner ... A stellar defensive back who has 11 career interceptions as of October 3, 2019 ... Honorable mention all-league pick in the Eastern Wisconsin Conference as a sophomore ... Also a very good receiver on offense, scoring four reception touchdowns through the first six games of the 2019 season.

Basketball Honors: Three-time varsity letter winner for coach Corey Behnke at Chilton ... Averaged 10 points and 6 rebounds per game as a sophomore and 16 points and 10 rebounds per contest as a junior ... Named first-team all-league in the Eastern Wisconsin Conference as a junior, the only underclassmen on the first team ... Finished fourth in the state in blocked shots a year ago with 89 on the season ... Two-time team winner of the Windex Award as the top rebounder at Chilton.

Baseball Honors: Three-year varsity letter winner for the Tigers ... Hit .314 and earned Chilton's most improved award as a junior.

Favorite Sport: "My favorite sport is basketball. I think this is because it is always fast-paced and you can't let your guard down at all. I think this is specific to the defensive side of the ball. Nothing feels better than locking the best player on the other team down or getting blocks left and right playing helpside defense. I think it is the best part of the game because defense wins championships."

Best Part of High School Sports: "The best part of high school sports has to be the warm-ups when you take the court on a big game and the gym is loud as can be. When everyone is up on their feet cheering for you even when the game didn't start yet. It  sends chills through my spine every time."

Best Advice from a High School Coach: "The best advice I ever got was that just because something isn't working, that doesn't mean you are doing it wrong. Sometimes the shots don't fall or you hit the ball right to the defense. There is not much you can do about it besides sticking to the fundamentals and concentrating on every little detail until you get it right."

Most Memorable Moment in High School Sports: "My most memorable moment in high school sports was my first football game ever as a defensive back. I was second string and I didn't expect to play at all. Late in the third quarter, the start starting ahead of me was sidelined due to cramps. I had to go in and try and take down these guys who were much bigger than me. I was still in at the end of the fourth quarter and we were ahead by seven points, but they were tearing apart our defense. One play, the quarterback scrambled to his left and threw a jump ball to the receiver I was covering. I came down with it and sealed the game with my first-ever interception."

Toughest Part of Playing Three Sports: "You don't get time between seasons to just be a kid. It is always school, then practice, then homework and time for bed, just to do it again the next day."

Favorite Opponent: "My favorite opponent is New Holstein because no matter what the sport or what their record is, you are always going to be in a dogfight until the end. High-intensity games are always the best."

Favorite Professional Athlete: "Dennis Rodman. The No. 1 reason was that he knew his role on the Bulls' team. He knew his job was to go out every night and bruise the opponent's post player and to get rebounds for Michael Jordan and Scottie Pippen. He was more than willing to get on the floor for a loose ball or to box out any player he saw on the court."

Toughest Individual You’ve Competed Against: "The toughest individual I competed against was Connor Faucett of Valders. He was much bigger than me and he pushed me around my sophomore year."

Most Admired High School Teammate: "My most admired high school teammate was Peyton Meyer because he wasn't the biggest or the fastest, but that didn't stop him from being the toughest. He would always be on the opponent's best player and he would lock them down defensively. He knew his role on the team was to do this and to teach the underclassmen how to be physical. He is the reason I play the way I do."

College Plans: "I plan to go to UW-La Crosse and take a pre-professional track to become a physical therapist. I also might play college basketball."

I Find it Relaxing to: "Watch Netflix, play video games and get some shots up in the gym."

Favorite Website: "My favorite website is krunker.io because it's a time killer and something to do when I am bored in off block."