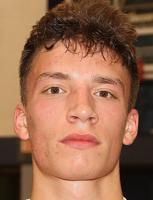 Cross Country Honors: All-South Central Conference performer in each of the past four seasons ... Helped the coop team from Wautoma/Wild Rose to consecutive team titles in 2017, 2018 and 2019 ... Key member of the Wautoma/Wild Rose sectional title squad as a senior ... One of four runners in school history to achieve all-conference status in all four years of high school.

Basketball Honors: Second-team all-Central Wisconsin Conference performer for Wild Rose as a freshman and sophomore under former coach Jim Komp ... First-team all-league player as a junior under first-year coach Jeff Murphy ... Improved scoring output from 11.9 ppg as a freshman to 16.1 ppg as a sophomore and 18.6 ppg as a junior ... Also averaged 6.7 rpg and 4.5 apg as a junior ... School-record holder for assists in a season (142) and career (338) ... Athletic backcourt player who is ranked among the Top 50 seniors in Wisconsin in the WisSports.net Player Rankings.

Favorite Sport: "My favorite sport is basketball. It has surrounded me ever since I was born and has always been a huge factor in my life. I love the level of physicality and competition that goes into the game, leaving no room for weak players."

Best Advice from a High School Coach: "Somebody is always working harder than you."

Most Memorable Moment in High School Sports: "Playing in packed gyms in basketball regional final basketball games and standing on top of the podium at state track after winning the triple jump."

Best Part of Playing Three Sports: "Becoming a well-rounded athlete. By competing in different sports throughout the year, you become more versatile, which only benefits you in the long run."

Toughest Part of Playing Three Sports: "You never have any down time, which can be detrimental in the form of injuries and school work load."

College Plans: "I plan to compete in either basketball or track in college, hopefully both. I look forward to competing at the highest level I can in either sport."

Activities Outside of Sports: "I'm a member of the Springwater 4-H group and compete in math league at school."

I Find it Relaxing to: "Beat my brothers in Madden."