Each week WSN will take a look at the happenings in the Wisconsin Collegiate Conference, which includes many of the two-year campuses in the UW system. A look back at the big performances and news from the week before, a look ahead to some of the big games coming up, plus a Player of the Week will be featured.

The weather wreaked some havoc on Saturday's schedule, with none of the four games completed. However, there was plenty of excitement and fireworks last Wednesday around the WCC.

It started with an exciting overtime contest between Fond du Lac and visiting Marinette. The game was knotted at 77 at the end of regulation after a second half comeback by Marinette, but Fond du Lac would pull off a narrow 90-87 victory. Nick Brakebush (Westfield HS) scored a game-high 33 points, while Duwon Beck (Messmer HS) also had 30 points, without the benefit of a made free throw or three-pointer.

Wausau and Manitowoc burned up the scoreboard, combining for 201 points as Wausau won 105-96. Wausau had 105 points despite no player scoring more than 18. An amazing seven players hit double digits, led by 18 points from Casey Kowalski (Mosinee HS). Ian Gibbs (Port Edwards HS) had a double-double with 14 points and 10 assists, adding five steals three rebounds as well. Damen Trice, Jr. had a game-high 31 points for Manitowoc.

The theme of close action continued as Fox Cities held off a Marshfield comeback attempt to score an 85-84 victory. While stats are not available for Fox Cities, Marshfield was led by 24 points and 10 rebounds from Ethan Posteluk (Marshfield HS).

It is an extremely busy week coming up for WCC teams, with 16 games scheduled.

Tonight sees East-leading Sheboygan making the short trip to Manitowoc. Wausau is trying to continue the momentum from last week's high-scoring win as they host Fox Cities. Fond du Lac travels to Marshfield and Washington makes the trip to Richland.

The Champions Center in Appleton is scheduled to host ten games over the weekend, weather permitting of course. Five games are set for Friday, beginning with a pre-noon tip-off between West Division-leading Baraboo and perennial contender Waukesha. Marshfield versus Marinette and Richland taking on Fond du Lac are the afternoon games. The evening session includes Fox Cities facing off against Manitowoc and Wausau taking on Sheboygan.

Saturday's action starts bright and early at 10 am as Baraboo takes on Washington, continuing throughout the day with five total games.

A couple games are scheduled for next Monday as well: Fox Cities at Waukesha and Marinette hosting Sheboygan. 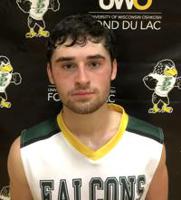 Fond du Lac picked up just it second league win of the season last Wednesday, topping Marinette 90-87 in an exciting overtime contest. Second-year guard Nick Brakebush (Westfield HS) made 12-of-20 field goals, four-of-five free throws, and five-of-eight three-pointers for a total of 33 points in the win. It was the third time this season he went over 30 points. Brakebush added five assists and five rebounds for the Falcons as well.