Here are the Wisconsin Sports Network weekly award winners in boys' basketball for the games played February 10 through February 15:

Carter Gilmore, 6-7, Sr., F, Arrowhead
The University of Wisconsin recruit was outstanding once again last week as the Arrowhead Warhawks clinched the title in the Classic Eight Conference with wins over Waukesha North and Oconomowoc. A versatile wing player who can handle the ball, pass, shoot, rebound and defend, Gilmore became the school's all-time leading scorer last Tuesday by scoring 30 points in an 86-50 win over Waukesha North. He added 10 rebounds, 7 assists and 4 blocked shots in the triumph. In a come-from-behind win over Oconomowoc Friday, Gilmore finished with 19 points, 11 rebounds, 6 assists and 4 blocks in a 67-60 triumph. Gilmore has scored 1,344 career points and has led Arrowhead to a 17-1 record under coach Craig Haase by averaging 25.0 points, 10.8 rebounds and 5.3 assists.

Altoona Railroaders
First-year coach Paul Henrichs guided Altoona to no less than a share of the Western Cloverbelt Conference title last Thursday when the Railroaders defeated second-place McDonell Central, 64-38. Altoona, which last won the Western Cloverbelt championship during the 2006-07 season, can win the crown outright with a victory over visiting Cadott on Tuesday. Picked to finish second in the league in the preseason, Altoona is led by three juniors -- Keshawn Harris (6-0), Evan Moss (6-4) and Brayden Turk (6-0). Harris leads the club in scoring at 16.5 ppg followed by Moss at 13.2 ppg and Turk at 12.8 ppg. Harris also is contributing 9.9 rpg and 4.0 apg for the Railroaders, now 13-3 on the season. Henrichs, who starred as a player at Medford High School and St. John's University in Collegeville, Minnesota, led Augusta to two Western Cloverbelt titles and a 137-119 record in 11 seasons before taking a teaching position in Altoona a few years ago. 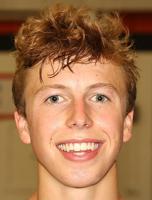 Ryan Brown, Medford
In his four-plus seasons as the head coach at Medford, Ryan Brown has led the Raiders to 78 victories and 51 losses through last Friday's 67-49 triumph over Mosinee. The latest victory clinched the title in the Great Northern Conference for the Raiders, who got 19 points from senior Justin Sullivan (5-7), 14 from junior Peyton Kuhn (5-11) and 13 from freshman Logan Baumgartner (6-1). Brown, who also helped Medford to the Great Northern Conference crown in 2016-17, sends his team up against Big Rivers Conference-leading Chippewa Falls on Thursday. Medford takes a 17-3 mark into that contest thanks to Kuhn averaging 19.2 ppg, Sullivan 12.7 ppg and Baumgartner 9.1 ppg. Medford has won eight games in a row since losing a non-league game to highly regarded North Scott, Iowa, on January 11. According to Star News sports editor Matt Frey, Medford has lost just one Great Northern Conference game/match in football, soccer, wrestling and boys' basketball in 2019-20.