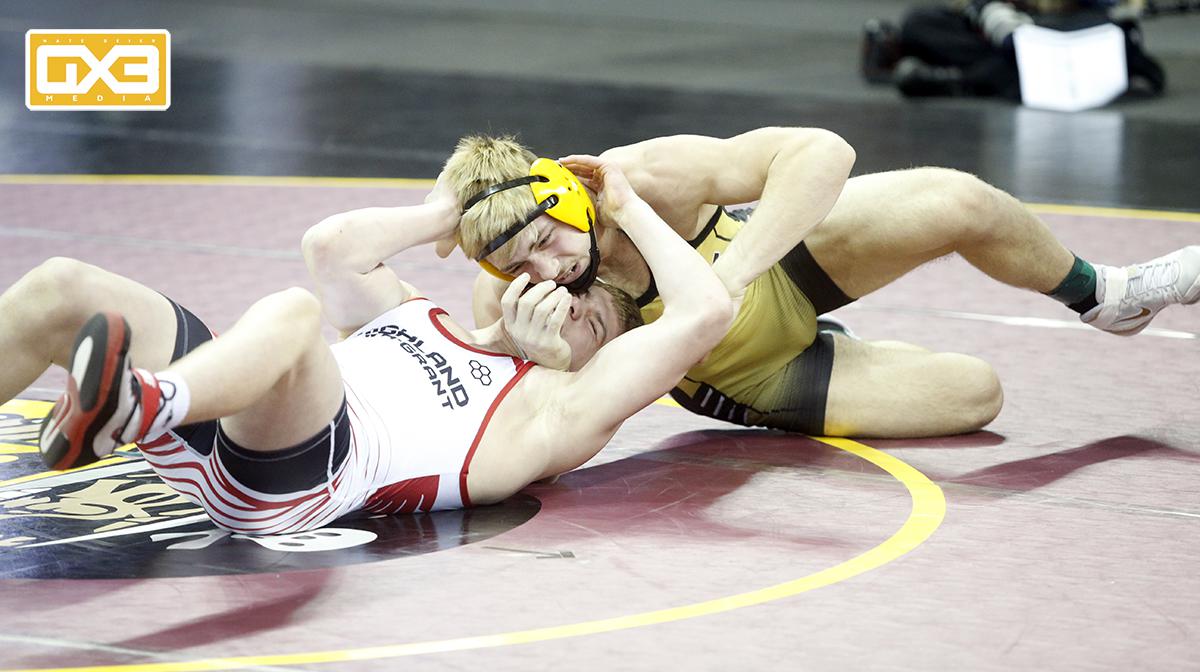 Arrowhead senior Keegan O’Toole kept his pursuit for four consecutive state titles alive by pinning Ben Kumprey of Burlington in 2:37. All three of O’Toole's wins this weekend have come via fall. He’s spent just 7:44 on the mat across those bouts.

Below are a few of the other highlighted matches from the state semifinals.

Action resumes Saturday morning with the consolation semifinals, followed by the third- and fifth-place matches.

Then comes Session 5, the pinnacle of high school wrestling in the state of Wisconsin. The state finals are slated to begin at 5:30 p.m.

126 pounds: No. 1 Jager Eisch of Kaukauna bested No. 2 Hayden Halter of Waterford 4-2 in their semifinal tilt. With the win, Eisch denied Halter a shot to wrestle for his third consecutive state title.

Eisch squares off with No. 3 Michael Parker (Slinger) in Saturday’s state title bout.

Henschel faces No. 3 Cody Minot of Ashwaubenon in the state finals.

152 pounds: Arrowhead’s Noah Mulvaney made a case for being the state’s top freshman as he pinned No. 1 Luke Mechler of Stoughton with eight seconds remaining in their semifinal bout.

Mulvaney gets undefeated No. 2 Kaden Reetz of Madison Memorial in the finals Saturday night.

182 pounds: No. 3 John Gunderson (Baraboo) maintained his perfect record with 4-3 victory over No. 1 Sam Skillings (Menomonie).

Gunderson toes the line against No. 2 Mason Diel (Arrowhead) in the championship match.

138 pounds: Third-ranked Charlie Stuhl of Ellsworth handed No 2 Jessie Tijerina of Portage his first loss of the season via a 3-2 decision in the semifinals Friday night.

Stuhl moves on to face No. 1 Matty Bianchi of Two Rivers for all the marbles. Bianchi is ranked No. 17 in the nation by FloWrestling.

170 pounds: No. 8 Hunter Andersen of GET/Melrose-Mindoro qualified for the state title match courtesy of a 9-6 win over No. 5 Sawyer Helmbrecht (Lodi) in the semis.

Andersen will square off with No. 2 Clayton Whiting of Oconto Falls for the D2 state title at this weight. Whiting, a sophomore, was a state champ at 152 a year ago.

120 pounds: Second-ranked Cash Stewart of Poynette punched his ticket to the state finals by pinning top-ranked Carter Greening (Weyauwega-Fremont) 4:43 in to their semifinal tilt.

Stewart will face No. 3 Josiah Berg of Boyceville in the state championship match Saturday night.

Dennee is one of a D3-best six state place-winners for the Tigers.

Springer will attempt to become Mineral Point’s 51st all-time state champion when he faces No. 7 Will Peters of Chetek-Weyerhaeuser/Prairie Farm.

170 pounds: Marshall’s Dylan Horstmeyer earned a state title match berth with a 5-2 win over No. 2 Conor Vatland of Westby.

No. 5 Horstmeyer will do battle with undefeated No. 1 Brady Spaeth of Cadott in the championship bout.