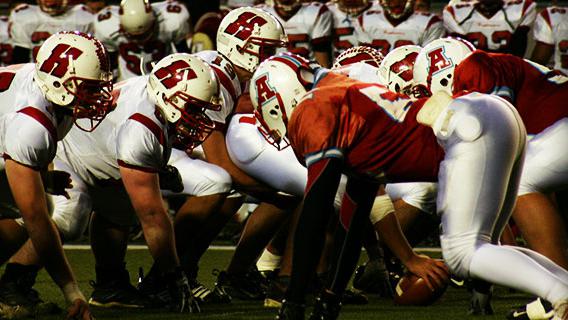 A process that spanned several years will finally come to fruition this fall with a statewide football conference realignment that will move approximately 15% of teams to new leagues. There are some rivalries that will go away (see more about those here), but the realignment will create some exciting new rivalries and provide fans with match-ups, whether conference or non-conference, that we have never seen before.

Below are some of the games we get to see this year as new required conference match-ups or that we otherwise would not have been able to see before.

Hudson at Sun Prairie, Week 1 -- For the first time in over a decade, the Big Eight Conference is playing non-conference regular season games. And Sun Prairie head coach Brian Kaminski wasted no time in lining up a challenge for his team, connecting with Hudson's Adam Kowles to schedule this non-conference contest. It is a lengthy trip for Hudson, but something they are very much used to at this point.

Middleton at Bay Port, Week 1 -- With the opening of two non-conference games for the first time in years, Middleton head coach Jason Pertzborn was quick to schedule a pair of the state's top programs early in the season. It begins with a trek to FRCC heavyweight Bay Port, who is coming off its first state finals appearance.

Waunakee at Middleton, Week 2 -- We've been pining to see a regular season game between Waunakee and a Big Eight foe for years, and while the Warriors have scrimmaged against Verona and Sun Prairie at times, this Week 2 showdown is the first time it actually happens. Not only that, but Waunakee will face off against former Big Eight squads Janesville Parker and Janesville Craig as part of the reformed Badger-Large. For years we've wondered how Waunakee would do in the Big Eight (and if or when they may move there), and now we get a bit of a sneak preview.

Monona Grove at Madison La Follette, Week 2 -- Another chance for Madison-area squads to meet up after years of being unable to schedule each other due to closed conferences. Not only that, but these schools are separated by less than a mile geographically, and you can often hear the sounds of one game from the other's stadium.

Menasha at Neenah, Week 2 -- Two cities directly connected who spent many years in the same leagues and/or playing against each other. However, when Menasha left the FVA for the Bay Conference half a decade ago, the matchups died off. However, with Neenah now freed up for more scheduling options in the redesigned FVA, these squads will meet again for the 97th time in total. First played in 1896, Neenah leads the all-time series 51-40-5.

Arrowhead at Homestead, Week 2 -- Two of the state's top large-school programs square off as the North Shore Conference schools, including Homestead, are available for non-conference games after several years as a closed, ten-team league. Of course, these teams met three years in a row in the Division 1 state title game from 2006 to 2008, with Homestead winning two of those. Homestead also gets rival Germantown back on the schedule in Week 1.

New Berlin Eisenhower at Catholic Memorial, Week 3 -- Catholic Memorial moves from the Classic Eight to the new/old Parkland Conference for 2020. The very first league game of the year is a big one, as the two-time defending state champion Crusaders will face off with New Berlin Eisenhower, who has been one of the most consistent programs in the Woodland the last few years and won a share of the Woodland-West title last season.

Watertown at Beaver Dam, Week 4 -- This rivalry wasn't gone very long, but after moving to different divisions of the Badger last season, the teams did not meet up. However, they have met 98 previous times over the years, first in 1904, as Watertown holds a 54-41-3 series record.

Regis at Mondovi, Week 7 -- Mondovi and Regis were two of the state's top Division 6 teams last year, each finishing unbeaten in the regular season. Both teams would end up falling to D6 champion Saint Mary's Springs in close games, however -- Mondovi in the state semi-finals and Regis a week later in the title game.

Amherst at Stratford, Week 9 -- This is a rematch of last season's Division 5 state semi-final, when Amherst became the first team all season to score on Stratford, though Stratford would go on to win the game 19-7. Both teams are ranked in the top five of our Spring Football Rankings for Division 5.

Onalaska at River Falls, Week 9 -- River Falls' move to the Mississippi Valley Conference wasn't without controversy, but they should enter as one of the favorites in 2020. One of the other expected top teams is defending league champion Onalaska, who is smarting after going out in a Level 1 upset to Monroe last season.