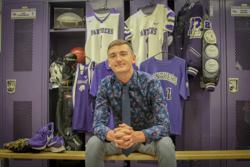 Favorite Sport : "I really enjoyed playing all five sports, but my favorite would have to be basketball. I love the intensity and the crowd being right there and helping bring energy to the game. As the point guard, I loved having the ball in my hands and having control of the game, and by getting my teammates the ball in position to score we were able to win three conference championships."

Best Part of High School Sports: "I just love to compete and the special relationships I have developed with my teammates. It is something you just can’t replicate in any other part of your life."

Best Advice from a High School Coach: "If you Look good, you feel good, you play good."  ...  "Always focus on the next play."

Most Memorable Moment in High School Sports: "Being fortunate enough to win six different championships in my high school career it is really hard to pick the most memorable, but I would have to say two really stand out in my mind. The first being winning a conference championship in golf my freshman year when my grandpa was the head coach, my dad was the assistant coach and my brother and I were the number one and two golfers on the team. Then this year I was able to cap it off by winning a regional championship in basketball, the first one 41 years since 1979 and with my grandpa (Duane Wilde) coaching me again."

Best Part of Playing Five Sports: "I love to compete and playing five sports in three seasons allowed me to compete year-round and brought new challenges every season. It also allowed me to meet a lot of different people."

Toughest Part of Playing Five Sports: "I knew if I played five sports I wouldn’t reach my full potential in any one sport, but being in a small school, I felt that since I was good enough to contribute to each team and help their success, that was more important. Dual sporting was tough, the toughest for me mentally was when I had to choose between things like golfing in the sectionals or pitching in a regional baseball game that were on the same day. Probably the toughest for me physically was playing a football game on Friday night and getting up to run a cross country meet on Saturday morning."

Favorite Opponent: "Deerfield in basketball. I have been playing against them since I was in fourth grade and we developed a big rivalry and always had good competitive games between us."

Favorite Professional Athlete: "Giannis Antetokounmpo of the Bucks. He has helped put the Bucks back on the map after some tough years, and I feel like I have helped do the same at Palmyra-Eagle."

Toughest Individuals You’ve Competed Against: "JC Butler from The Prairie School when we played against them in the regional finals."

Most Admired High School Teammate: "It would have to be Danny Hammond. Danny and I grew up being best friends and playing sport together. We have always had a connection on and off the field and court that I really can't explain. Even thought we play different positions, we are the same type of player because we always put the team and winning ahead of ourselves."

College Plans: "I will be attending Carroll University as a direct admit in the Doctorate of Physical Therapy program and hope to be playing basketball."

I Find it Relaxing to: "Spend time with family and friends."