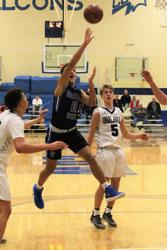 For the second consecutive season, one of Wisconsin's top high school basketball players has given a verbal commitment to accept a scholarship offer from Valparaiso University men's basketball coach Matt Lottich.

"Valpo has been with me since day one and have always been there through my ups and downs," Palesse said. "I have developed a great relationship with the coaching staff."

A versatile backcourt prospect who can play either guard position, Palesse earned first-team all-Classic Eight Conference honors as a sophomore and junior. He averaged 24.5 points and 6.7 rebounds as a junior for a very young squad at Waukesha West.

Palesse and classmates Sam Ziebell (6-2), Peter Skogman (6-5), Dylan Rhodes (6-1) and Kieran Keller (6-1), along with junior Cal Krohn (6-6), form a strong nucleus for a Waukesha West program that could challenge for the Classic Eight Conference crown under coach Don LaValle in 2020-21.

"I'm looking to lead my team to state next year, and shock the world, as coach LaValle would say," Palesse said.

Palesse joins River Falls forward J.T. Dougherty (Army) as class of 2021 prospects from Wisconsin who have given verbal commitments to attend NCAA Division I schools.