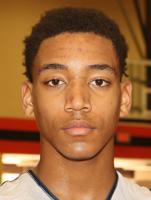 Loyalty played an enormous role in James Graham's decision today to give a verbal commitment to coach Mark Turgeon to accept his scholarship offer to play college basketball at Maryland.

"They've been there since the beginning," Graham said of the Terrapins. "I decided to stay with them because they showed they wanted me from the beginning."

Graham, a 6-foot-8 wing player from Nicolet with deep shooting range, selected Maryland over his other finalsts of Auburn, Memphis and Wisconsin.

"The coaches at Maryland have told me they like my ability to score the ball from the wing position," Graham said. "They needed a wing who could put the ball in the hoop."

Graham did just that for the Nicolet program last winter, averaging 20.6 points for a squad that went 22-3 and won the North Shore Conference title under coach Allan Hanson.

Offers from high-major programs across the United States came pouring in for Graham over the spring, and then he played well for the Wisconsin Playground Club 17U squad coached by Ritchie Davis in July and August.

Even in games where Graham's perimeter shots were not falling, he kept taking the shot opportunities that came his way and most often found a groove that led to some big scoring games while playing in club events.

"My confidence doesn't waver, whether I'm scoring or not," Graham said. "That is a credit to coach Hanson at Nicolet. I remember my sophomore year playing with Jalen Johnson and Jamari Sibley, coach Hanson kept telling me to shoot the ball. I was hesitant to do that at first, but eventually I started listening to him and my confidence soared."

After attending University School of Milwaukee as a freshman, Graham transferred to Nicolet and played a key role on the Knights' WIAA Division 2 state-championship team as a sophomore.

As a junior, Graham earned first-team all-league laurels and led the team in scoring. Nicolet was poised for a return trip to the WIAA State Tournament when the event was canceled on March 12, 2020. The Knights were slated to play Kaukauna in a sectional final the next day.

Graham and classmate Kobe Johnson (6-5), who narrowed his list of collegiate options to California, Colorado State, Elon, Kansas State and USC today, form a solid one-two punch for Nicolet as they enter their senior seasons.

Graham says he is pleased his collegiate decision is behind him so he can concentrate on getting better for his final year of high school basketball and his college future at Maryland.

"I'm happy to have the decision behind me because now I can really work on the things I need to work on ... like getting stronger," he said.