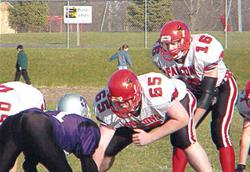 The Jim Leonhard Award is presented to the top senior defensive back as part of the WSN Senior Football Awards. The award is named after former Flambeau High School and University of Wisconsin athlete Jim Leonhard, who has gone on to great success in the NFL with the Baltimore Ravens, New York Jets, Buffalo Bills, Denver Broncos, New Orleans Saints, and Cleveland Browns. In 2016 he returned as an assistant coach at Wisconsin.

The pre-season list will be trimmed down to 25 semi-finalists halfway through the year, with five finalists chosen at the start of the playoffs. Winners are announced the week of the state finals.

The pre-season list will include all players, including those whose teams have moved to the alternate spring season. The remaining lists will feature only those programs who will play in the fall. We will review in the spring to determine if additional finalists or winners will be selected for the spring season.