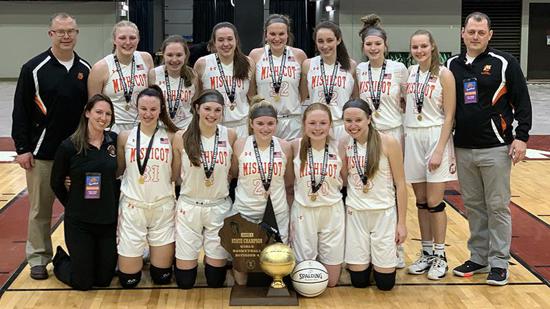 The Indians topped Mineral Point, 70-66, in the Division 4 state championship game at the La Crosse Center.

Mishicot jumped out to a 7-2 lead early in the contest and led by as many as 11 points in the first half and led 42-36 at the break.

Mineral Point answered by going on a 19-6 run to tie the game at 55 with 8:08 remaining. That run included three of the Pointers' seven made 3-pointers in the game.

The rest of the contest was close and game was tied on two other occasions. but Mishicot did not let Mineral Point take the lead at any point.

Mishicot opted to foul leading 69-66 with four seconds to go to send Mineral Point to the line instead of giving them a chance to tie the game with one shot.

That decision was a good one for coach Mike Garceau and the Indians as senior Macy Aschliman missed the front end of a 1-and-1 free throw.

Senior Kylie Schmidt sealed the win for Mishicot by hitting on of two free throws to give the Indians a four-point lead with three seconds to go.

Schmidt finished with a 27 points, 13 rebounds and four assists (all game highs) to lead Mishicot to the victory.

The 6-foot Purdue Northwest signee shot 7-for-13 from the field and made 13 of 18 free throws.

Mishicot ends the year with a 20-2 record and a 19-game winning streak. Last season was the program's first trip to the state tournament, falling to a strong Melrose-Mindoro squad in overtime, in what ended up being the final game of the 2020 WIAA state tournament.

Mineral Point was led by junior Ella Chambers, a 5-foot-3 guard, who tallied 20 points on 8 of 14 shooting.

Joining her in double figures were sophomore Kennedy Wenger and junior Mallory Lindsey, who finished with 15 and 11 points, respectively.

Mineral Point's 20 three-pointers made over its two games at the state tournament is the new state tournament record for Division 4, which was previously held by Aquinas (2019) with 15. The only team to make more in a state tournament was Waukesha South, which made 21 in 2002, but that was over three games.

The Pointers finish the year with a 17-6 record, taking home the silver ball in the program's second state tournament appearance.