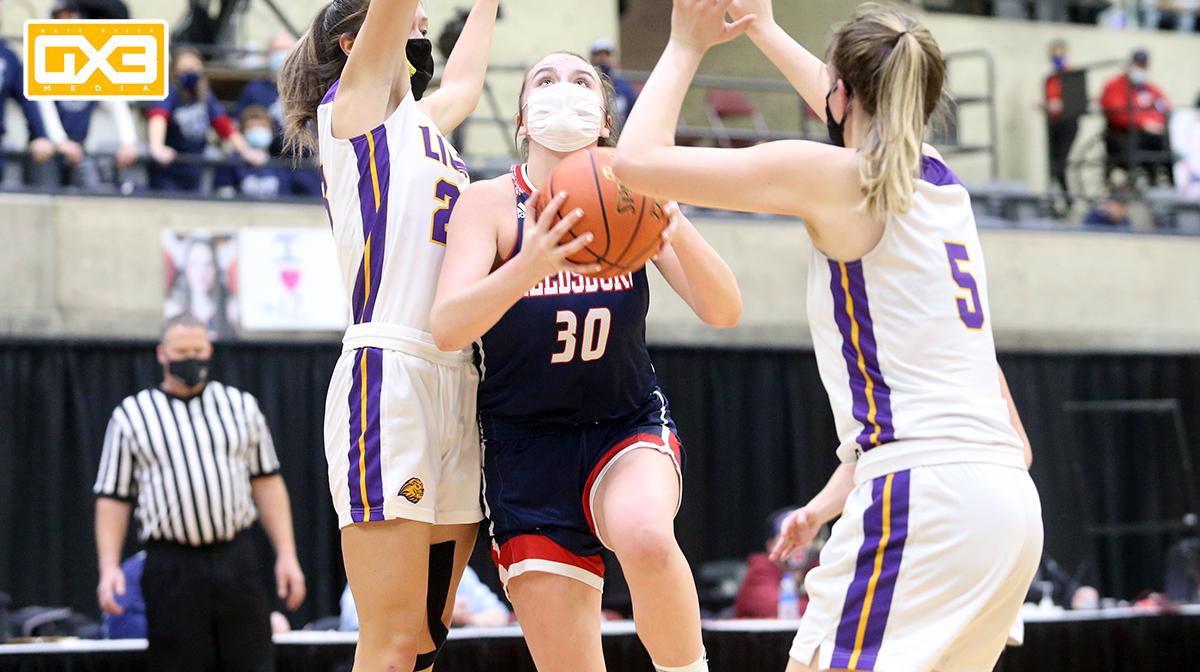 Reedsburg's Mahra Wieman is part of the WSN All-Tournament Team

Germantown captured its first state title in program history, in the team's first trip to state. The Warhawks defeated previously unbeaten Hudson, 63-48, in the championship game. Germantown was ranked No. 2 WisSports.net Preseason Top 10.

Lake Mills claimed the program's first-ever state tile, in the L-Cats' second trip to state. They defeated Aquinas, 78-67, in the state championship game, ending the Blugolds' 37-game winning streak. Lake Mills was ranked No. 5 in the Preseason Top 10.

Mishicot captured the school's first-ever state championship. The Indians topped Mineral Point, 70-66, in the title game. Mishicot was ranked No. 3 in the Preseason Top 10.

Assumption captured the program's third WIAA state title. The Royals edged Three Lakes, 55-48, in the championship game. Assumption was listed among the honorable mention teams in the WisSports.net Preseason Rankings.

KK Arnold, 5-9, soph., Germantown -- Arnold was nothing short of sensational at the state tournament. The 5-foot-9 point guard finished with 31 points in the Division 1 state championship game. Arnold shot 12-for-18 from the floor, made six of seven free throws, and added seven assists and four rebounds in the 63-48 victory over previously unbeaten Hudson. In a 76-57 win over Verona in a state semifinal, Arnold tallied 19 points, six rebounds, four assists and three steals. She is on the top players in the nation in the 2023 class, and holds 30 Division I offers.

Jaelyn Acker, 5-7, sr., Germantown -- Acker shots the lights out at the state tournament. She finished with 28 points and shot 7-for-14 from behind the arc in the Warhawks' win over Verona in a state semifinal. In the D1 state championship game, Acker made five of 12 from 3-point land and tallied 19 points in the win, and added 13 rebounds and two steals in their win over Hudson. The NCAA Division I Cal Baptist signee tied the record for 3-pointers in a game with seven and set the the WIAA state tournament record for 3-pointers in a tournament with 12.

Bailey Butler, 5-8, sr., Black Hawk -- Butler, who was named 2021 Miss Basketball by the WBCA, finished with 23 points, six rebounds, five assists and five steals in a 51-48 loss to Three Lakes in a Division 5 state semifinal. The 5-foot-8 UW-Green Bay signee shot 9-for-16 from the floor and made three of six from behind the arc.

Gracie Grzesk, 5-11, frosh., Notre Dame -- Grzesk tallied a game-high 16 points on six of 12 shooting in the Tritons' win over Onalaska in a state semifinal. She added two assists and two steals in the victory. In Notre Dame's victory against Reedsburg in the D2 state championship game, Grzesk finished with seven points, six rebounds and two assists. The talented freshman holds a Division I offer from UW-Green Bay.

Vivian Guerrero, sr., Lake Mills -- Guerrero helped lead the L-Cats to the Division 3 state title. She finished with 21 points, 13 rebounds, three assists and two steals in a 78-67 win over Aquinas in the state championship game. The 6-foot-1 forward shot made six of eight from the floor and went 9-for-10 from the free throw line. In a 70-60 win over Lake Mills in a state semifinal, Guerrero tallied 15 points and seven rebounds.

Audrey Hatfield, sr., Hudson -- Hatfield led the Raiders to a D1 state runner-up finish. The NCAA Division I University of St. Thomas signee finished with 21 points, eight rebounds and two assists in Hudson's 61-46 win over Franklin in a state semifinal. She made eight of 13 from the floor and went 5-for-5 from the free throw line. In the Raiders' 63-48 loss to Germantown in the state championship game, Hatfield tallied 14 points, seven rebounds and four blocks. She shot 7-for-8 from the floor in the title game.

Sydney Lurvey, sr., Three Lakes -- Lurvey had a huge Division 5 state semifinal. The 5-foot-7 guard set the Division 5 WIAA state tournament record for 3-pointers in a game, going 6-for-11, and leading the Bluejays past Black Hawk, ending the Warriors' 75-game winning streak. Lurvey tallied five points, four rebounds and two blocks in their loss to Assumption in the championship game.

Kylie Schmidt, 6-0, sr., Mishicot -- Schmidt led the Indians to the school's first-ever state championship. The 6-foot wing/forward finished with 27 points, 13 rebounds and four assists in their victory against Mineral Point in the D4 title game. She shot 7-for-13 from the floor and made 13 of 18 free throws. In a win over Fall Creek in a state semifinal, the NCAA Division II Purdue Northwest signee tallied 11 points, seven rebounds, two assists and two steals.

Jacy Weisbrod, 5-11, jr., Aquinas -- Weisbrod had a huge state semifinal against Westfield. The 5-foot-11 wing/guard finished with 31 points on 12 of 16 shooting, including going 7-for-9 on 3-pointers. The seven three-pointers ties the WIAA state tournament record for triples in a game, which was set by former Aquinas Taylor Theusch last season at the state tournament. In the Blugolds loss to Lake Mills in the D3 state title game, Weisbrod finished with 22 points on nine of 18 shooting.

Mahra Wieman, jr., Reedsburg -- Wieman led the Beavers to their first-ever appearance in a state championship game. The 5-foot-10 wing/guard, finished with 17 points, six rebounds, three assists, a steal and block in the Beavers' loss to Notre Dame in the state championship game. In Reedsburg's victory against New Berlin Eisenhower in a state semifinal, Wieman tallied 22 points, eight rebounds and a steal.