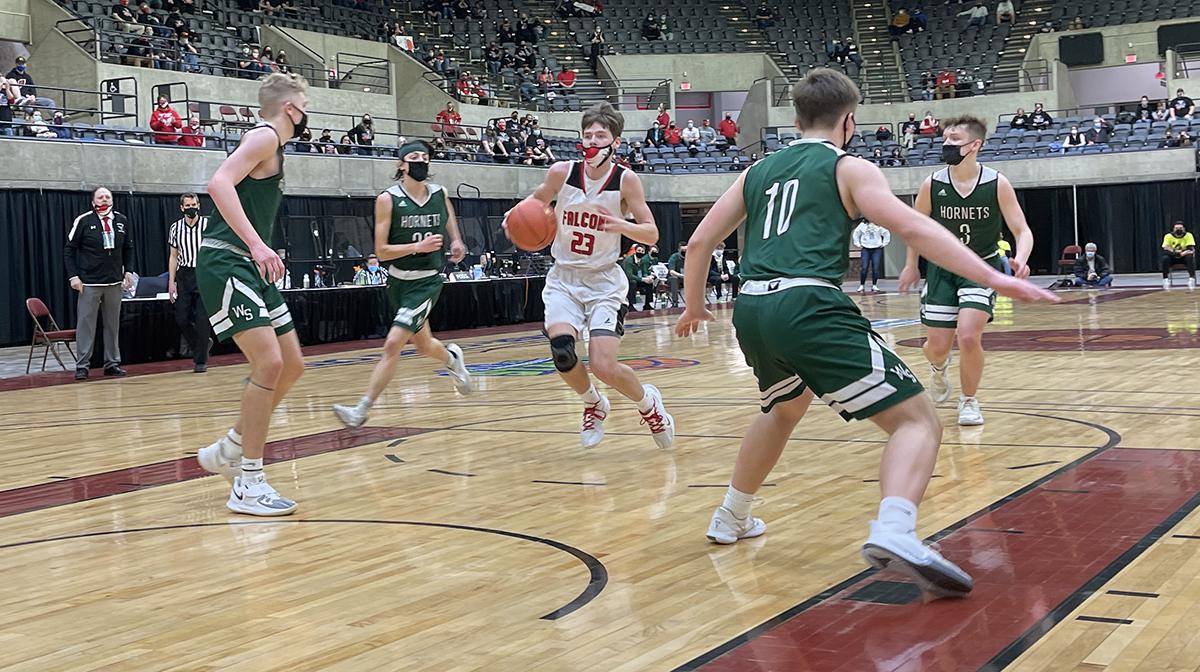 Top-seeded Hustisford found itself down eight points to plucky Wauzeka-Steuben with less than two minutes remaining in the first half of a WIAA Division 5 Boys Basketball State Semi-Final game. Not only that, but leading scorer Dylan Kuehl had just picked up his third foul of the game. However, the Falcons came to life to pull within a point at halftime and controlled the second half en route to a 65-53 victory to advance to the D5 championship.

While Wauzeka-Steuben got on the board first in the second half to push their advantage to 34-30, Hustisford would take the lead for good less than three minutes into the half on a layup by Alex Eggleston.

Hustisford's lead would swell as high as 13 points in the second half, and the Falcons remained in control the rest of the way.

The size of the Falcons was too much for Wauzeka to overcome, as Hustisford got 48 of its 65 points in the paint. Much of the damage was done by Kuehl and Eggleston, who scored 19 points apiece and combined for 16 rebounds. Eggleston finished eight-for-eight from the field. Blake Peplinski also did damage around the rim with ten points, adding seven assists.

Wauzeka was led by senior Gavin Ralph, who had a team-high 17 points, though four others would score at least eight in the contest.

Hustisford advances to the Division 5 title game in its first state tournament appearance.

McDonell Central blew open a close game at halftime to run away with a 67-40 victory over Green Bay NEW Lutheran in a Division 5 Boys Basketball state semi-final at the La Crosse Center Thursday afternoon.

Jake Siegenthaler was the definition of efficient on the offensive end for the Macks, making 10-of-13 shots from the field, four-of-four from behind the three-point line, and his lone free throw, totaling 25 points to go with six rebounds, four assists, and four steals.

As a team, McDonell Central shot 63.6% overall and 60% from deep, helping overcome 24 turnovers.

The game was close at halftime, with McDonell holding a 26-21 advantage. However, the Macks would go up double-figures just a minute into the second half and the game was never closer than 10 points again. The 27-point final margin was the largest lead of the game.

In addition to Siegenthaler's big day, McDonell Central got 10 points each from Logan Hughes and reserve center Joe Janus.

McDonell Central will advance to the WIAA state championship game for the third time after finishing second in 2018 and hoisting a gold ball in 2016.