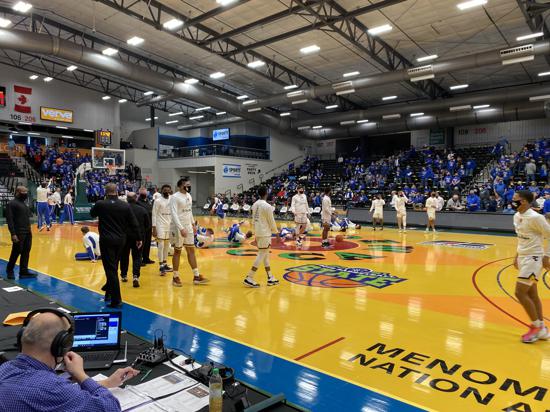 Jameer Barker has not received the state-wide accolades of teammates Tyrese Hunter and Kamari McGee, both NCAA Division I players headed to Iowa State and Green Bay, respectively.

But the talented 6-foot-2 wing from Racine St. Catherine's definitely was the most important player on the floor Friday in the Angels' 53-44 WIAA Division 3 State Tournament semi-final win over gritty Wrightstown.

Barker, who owns NCAA Division II offers from Chadron State, Hawaii - Hilo and Michigan Tech, scored 22 points and grabbed 16 rebounds to help bail out a St. Catherine's offense that sputtered for the most part against Wrightstown's aggressive defense.

In short, Barker saved the day for the Angels, who entered the game seeded No. 1 after spending the entire season ranked No. 1 among WIAA Division 3 schools in the WisSports.net Coaches poll.

"We knew all about the Division I players at St. Cat's, but the Division 2 kid (Barker) was their best player in regionals and sectionals," Wrightstown coach Cory Haese said. "He was the guy who really scared me. His mid-range game is so good and that's hard to defend. He's a heck of a player."

Barker's 22 points and the 14 put in by Hunter were just too much to overcome for a Wrightstown team that put itself into position to potentially pull the upset by playing with confidence, rigor and toughness.

However, some missed three-point shots, a botched layup or two and a less-than-superb showing from the foul line (9 of 13) sidetracked the Tigers, who needed to play at an extremely high level the entire 36 minutes in order to pull off the upset.

"We were fortunate enough in a pandemic to play 29 games," Haese said. "We didn't play a perfect game in our 28 previous game and we didn't today, either.

"We knew it would take a NC State-type of effort to get this win," added Haese, referring to North Carolina State's 1983 upset win over heavily favored Houston in the NCAA title contest.

St. Catherine's, which improved to 27-1 this season and 52-1 over the past two seasons, found itself in early foul trouble as McGee picked up two personals in the first few minutes of the contest.

However, the Angels still managed to take a 33-21 halftime lead behind Barker and Hunter.

When McGee returned in the second half, he guarded Wrightstown sharpshooter Matthew Hansen (6-2) and held him to just five second-half points after he had nine in the first 18 minutes.

"It wasn't our prettiest game by any stretch," St. Catherine's coach Nick Bennett said. "But, at this point, we just want to survive and keep playing. I told the guys if I get to coach them one more second or one more game, I'd take it.

"We made enough plays down the stretch to keep them at bay. Confidence can waiver, but effort cannot. Our offense has been fickle at times so our consistent has to be our defense."

"We knew St. Catherine's would be extremely tough for us to stop," Haese said. "We tried to make them shoot over the top of us. I was really proud of our defensive effort.

"Offensively, it was a struggle, to say the least. I think the multiple three-point lines on the court might have confused us as we took some very deep threes today. But St. Catherine's speeds you up and keeps coming at you. They have some very talented defensive players."

But when a big shot needed to be made to put St. Croix Central in the lead, it simply did not come.

The Panthers had three possessions in the second half when they trailed by a single point, but they came up empty each time.

Meanwhile, Lake Country Lutheran won its 26th game against just one loss by riding the steady play of junior Luke Heartle, who finished with 20 points, 12 rebounds, four assists and three steals in a 59-47 triumph.

"It was a great battle," St. Croix Central coach Randy Jordan said. "Both teams played very well defensively. Both teams had to make sure of every possession and work hard for every point that they got. Shooting percentages weren't very good on either end, looking at them. It's just one of those games where you have to fight hard and they made a few more baskets than we did."

Heartle, 6-foot-3 junior John Nehls and 6-foot-4 junior Ben Lubbers did the heavy lifting on offense for the Lightning.

Lake Country Lutheran shot just 36 percent from the field (19 of 53) and 33 percent from three-point range (7 of 21). But the Lightning did grab 34 pints and come up with nine steals.

"It was a game we had to completely grind out," Lake Country Lutheran coach Mark Newman said. "We did not play well on offense. St. Croix Central had a lot to do with that. I did think that we played really solid defensively. We stayed with it. When we got a little bit sideways our guys brought it back together.

"We hit some big shots and I liked the way we stayed together, even though all game long we got forced to score in ways that we really weren't accustomed to scoring."

Jackson Pettit had 13 points and was the lone player to score in double figures for St. Croix Central, which shot just 35 percent from the field.

The Panthers were hindered by 18 turnovers in addition to their poor shooting.

"That's very uncharacteristic," Jordan of the large number of turnovers. "That's twice our average. I think mostly we got a little careless. We tried to do a couple of things in the spread offense and tried to see if we couldn't get a layup or two.

"As a coaching staff, I'm going to take the blame on that. I felt that we tried too many things instead of staying with what was working as an offense."