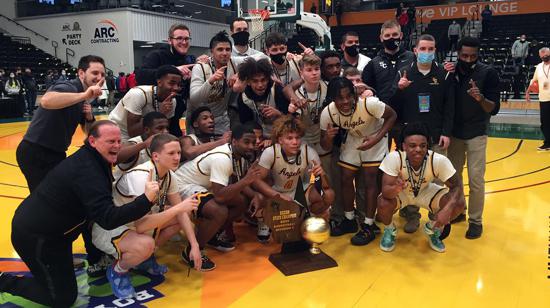 In the second half of Friday night’s WIAA Division 3 boys’ basketball championship game, Kamari McGee realized it was go time.

After scoring just four points in the first half against a stubborn Lake Country Lutheran team, the senior guard took over for Racine St. Catherine’s in the final 18 minutes, scoring 22 of his 26 points and leading the Angels (28-1) to a 68-49 win at Menominee Nation Arena in Oshkosh. It marked St. Catherine’s sixth WIAA state basketball title and the school’s 15th overall when including WISAA championships.

“Honestly, I don’t know what came over me,” said McGee, the UW-Green Bay recruit who finished 12 of 17 from the field as the Angels shot 70 percent in the second half. “I just realized that we really weren’t shooting that well, so I realized I was getting to my spots easy so I was just taking advantage of that.”

Most notable was a 10-point outburst over a four-minute period early in the second half that pushed a six-point Angels lead into double digits against the Lightning that would not disappear. It also made up for a two-point performance from all-state guard Tyrese Hunter, who was hampered by cramps and the lingering effects of an ankle injury.

“We’re more than one player and I can’t think of having a sidekick, if you will, as good and as complete as Kamari McGee,” St. Catherine’s coach Nick Bennett said. “We ask him to guard the toughest assignment every game. … We tell him, ‘You can’t take plays off.’ And he doesn’t.

“So when Tyrese, our school’s all-time leading scorer, wasn’t in a great rhythm offensively, for (Kamari) to say, ‘I’ve got to take the guy who’s averaging 25 a night and I’m going to have to pick up the load scoring and playmaking,’ it just shows how special a player he is.”

McGee’s outburst was the hurdle too big for the Lightning (26-2), who felt the fatigue of a rugged semifinal win over St. Croix Central earlier Friday prior to the relentless defense and spread offense of the Angels.

Lake Country Lutheran overcame St. Catherine’s hot early shooting, cutting a 16-point deficit to 32-27 at the half as the Angels got “jump shot happy,” according to Bennett. The Angels hit their first five three-pointers and nearly had a first-half double-double from Jameer Barker, who went into the break with 12 points and nine rebounds.

“We had trouble getting into our offense and we had moments where we settled in pretty well and moments where we didn’t,” Lightning coach Mark Newman said as his team was held under 50 points for only the second time this season. “Once they spread us out, we had a hard time keeping them in front of us.”

“Their ball pressure made it tough to get into a flow of the game,” said Haertle, one of 10 juniors on the Lightning’s 13-man tournament roster. “Kamari’s a great defender and he really pushed me to hit some tough shots and forced some shots I normally wouldn’t force.”

For Bennett, whose dad, legendary coach Jack Bennett, attended in-person for the first time this season, the state championship in an unfamiliar gym was fitting, as none of St. Catherine’s 29 games were at home due to COVID restrictions in Racine.

“I never heard one of our kids complain about it,” he said. “They were just thankful they got a chance to roll the ball out there and do what they love to do. They said, ‘We’re on the road? Fine. We don’t have a gym? Fine.’ It’s their attitude and positive feelings that propelled this season.”