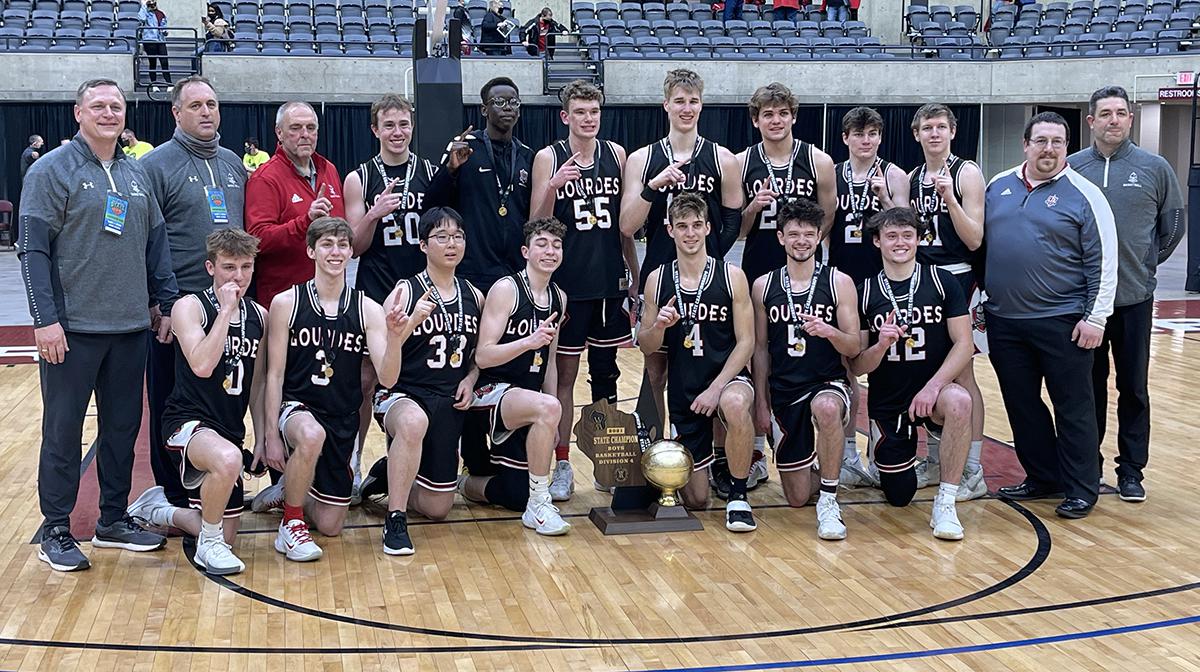 It is a club occupied by a precious few, and Friday night at the La Crosse Center, Lourdes Academy senior Nathan Slagter became a member when he dropped in a shot at the buzzer to lift the Knights to an improbable 43-41 victory over The Prairie School in the WIAA Division 4 Boys Basketball state championship game.

It was an ending that seemed all but impossible earlier in the game, as Lourdes could not find the bottom of the net, struggled to 18.5% shooting in the first half as The Prairie School ran out to a 15-0 lead, led by as many as 20, and was still up 27-12 at halftime.

Lourdes was getting good looks, however, but the hot-shooting Knights couldn't find the range. Meanwhile, The Prairie School was able to get inside against the Knights' defense, with Antuan Nesbitt, who scored 10 points in the first half, and Asanjai Hunter, who had nine before the break, doing most of the damage.

The second half started much the same as the first, and it appeared Lourdes Academy may not have enough in the tank to make a run.

However, up by double-digits a few minutes into the second half, The Prairie School began to slow things down offensively. It appeared to take the Hawks out of their rhythm a bit, and after going up 33-20 on a Kody Krekling breakaway with 11:50 remaining, The Prairie School would go more than six minutes without scoring.

During that time, Lourdes Academy began to hit a few shots finally, scoring 15 points to take the lead at 35-33 with 5:39 left in the game. The Knights even went up by four points just over a minute later, but The Prairie School would come back to re-take the lead with just over two minutes remaining.

A Joshua Bauer putback for Lourdes tied things up again at 41, and after Krekling missed a three-pointer with 1:09 left, Lourdes was able to hold for the last shot.

In a play that looked eerily similar to one two years ago at the state tournament, Preston Ruedinger found the ball in his hands in the waning seconds. Instead of taking a tough contested jumper, he dropped off a pass to forward Nathan Slagter, who turned and dropped in a short jump hook just over the outstretched fingers of The Prairie School's Antuan Nesbitt as the horn sounded.

Slagter raced across the court and into the hallways with his teammates in hot pursuit as the Knights celebrated their first WIAA state title.

Despite struggling mightily with his shot much of the game, Ruedinger scored 13 points, tying Joshua Bauer for team-high honors for Lourdes Academy.