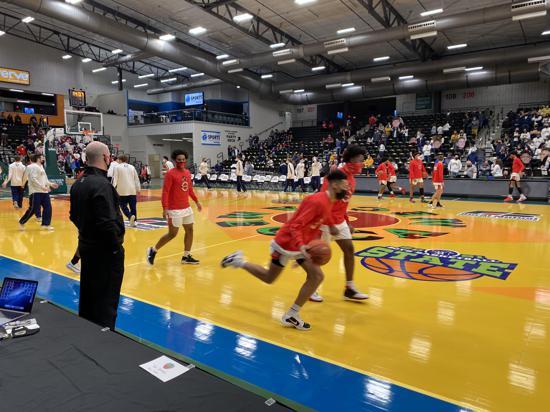 Kimberly coach Lucky Wurtz felt his squad played steady defense, like it has most of the season on the way to a 25-2 record.

The offense, on the other hand, took a good 18 minutes to get into sync.

It didn't matter, much.

Kimberly scored 27 points in the first half and then found things a little easier going in the second half, scoring 36 points in cruising to the victory over a determined bunch of Norskies from De Forest.

"Defensively, we played well the whole game," Wurtz said. "De Forest is a fantastic team. They can compete with anybody. But in the second half, we got better spacing and opened things up for (Jackson) Paveletzke."

Paveletzke, a marvously talented and exceptionally intelligent 6-foot-2 point guard, was fantastic throughout the contest for the Papermakers, scoring 28 points, grabbing 10 rebounds, handing out seven assists and coming up with three steals. He made 13-of-19 shots from the floor and both of his free throw attempts.

"(Paveletzke) is a really good player," De Forest junior guard Max Weisbrod said. "We couldn't gap him because he has so many good shooters around him. Our plans was to make him take tough twos, and he made most of them."

Weisbrod, an outstanding player in his own right, finished with 20 points, three rebounds and four assists for DeForest, which played 17 games in 40 days, all away from its home court, at one point during the season thanks to COVID-19 protocols in Dane County.

A 6-foot-4 junior and son of De Forest coach Craig Weisbrod, Max Weisbrod was one of four underclassmen who started for the Noskies.

Kimberly, on the other hand, had some senior punch in the post with 6-foot-11 Grant Asman and 6-6 senior Jackson Dudek combining for 19 points, 12 rebounds and four blocked shots.

"Kimberly is a really good team," Craig Weisbrod said. "They are really long and they shot the ball well. I thought we were physical with them  and I thought the fight in the dog was there with our guys. I'm proud of our guys, we just needed to make a few more shots."

In addition to limiting De Forest to 42 points, the Papermakers' strong defense held the Norskies to 30 percent shooting (17 of 57).

The 6-foot-1 senior point guard pounced on the opportunity to be the catalyst for the Red Raiders' hard-fought and entertaining 56-48 WIAA Division 1 State Tournament semifinal victory over River Falls Saturday.

The talented, aggressive, confident and physical Parzych made a huge three-point basket and then whipped a long pass to teammate Charles Singleton that turned into a layup as Wauwatosa East erased a 45-44 deficit and took a 49-45 lead.

River Falls got a career-tying sixth three-point basket from 6-foot-9 Army recruit JT Dougherty on the other end with 2:33 left to pull within 49-48, but Wauwatosa East scored the final seven points to seal the deal and head to the Division 1 title game for the first time since winning it all in 2008.

Parzych scored four of the seven points in that decisive run and finished with 19 points, six steals and five rebounds as the Red Raiders improved to 22-3 under veteran coach Tim Arndorfer.

“I didn’t shoot the three ball before that well but I’ve shot it well this season," said Parzych, who is headed to NCAA Division II Northern Michigan on a basketball scholarship. So, he sagged off me and gave me space in the moment. I’m a senior, so I want those big moments and big shots.”

Parzych's heroics were needed to get past a River Falls squad that won the Big Rivers Conference and finished the season 21-3 under coach Zac Campbell.

Dougherty had 25 points and seven rebounds to lead the Wildcats while teammate Zac Johnson, a 6-foot-3 senior headed to NCAA Division II Augustana University, was limited to just 13, 10 below his season average of 23.6 ppg.

Parzych and senior Jay Hinson Jr. (6-3) took turns guarding Johnson and were able to hold the four-year varsity performer to just 5-of-11 shooting from the field.

"We knew we would probably have to run different guys at him," Arndorfer said. "I thought Jay (Hinson) and Brian (Parzych) did an excellent job. I thought we did a great job hedging Marcus (Mbow), Alex, and Leon (Bond) and not allowing him a clean path. I thought we did a great job staying on the floor and not falling for any his head and ball fakes, and making him give the ball up.”

In addition to the 19 points scored by Parzych, Hinson finished with 13 points while Mbow, a Purdue football recruit, added six points and 11 rebounds.