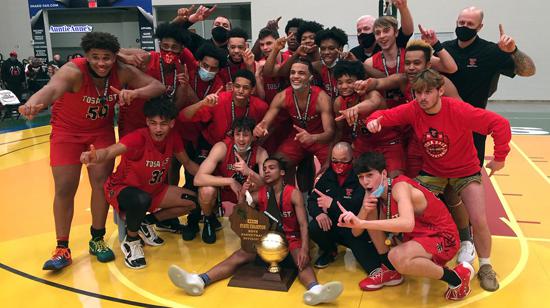 “At one point I was seeing it was a 12-point lead and everyone was telling me, ‘No, it’s 16 points,’” Arndorfer said after a 27-3 run gave Tosa East (23-3) a convincing 62-44 victory over top-ranked Kimberly at the Menominee Nation Arena in Oshkosh.

“We did a great job attacking the glass, just breaking down a little of their pressure. I think we got easy baskets and made them work hard for theirs. I guess I wasn’t aware (the run) was 27-3.”

It was the fourth state title for the school, matching its achievements in 1989 and 2008, plus a 1948 championship won when the city had only one public high school.

All told, the Red Raiders’ run took a 31-31 tie with 15:41 left and gave them a 58-34 cushion with 3:36 remaining. Over that time, Tosa East dominated the glass on both ends of the court and left the Papermakers gasping for breath and grasping for answers.

“We couldn’t generate any offense tonight,” said Kimberly coach Lucky Wurtz, who had the Papermakers in a state title game for the first time since the second of consecutive Division 2 championships in 1995. “They took some things away from us and we couldn’t beat them. We couldn’t get any transition.”

Transition starts with rebounding, and the Red Raiders nearly eliminated that from Kimberly’s second-half stat sheet after Kimberly led 27-26 at halftime. Tosa East outrebounded the Papermakers 16-6 over the final 20 minutes, something that Red Raiders senior Alex Singleton sensed building early in the second half.

“We were getting in a lot of foul trouble in the first half,” said Singleton, who finished with a team-high 20 points and eight rebounds. “We were down a point (at the half), but then we had the 27-3 run and that had to be led by offensive rebounds and defensive rebounds, controlling the glass and controlling what they were doing.”

That control included stifling Kimberly junior guard Jackson Paveletzke, who led the Papermakers with 14 points and six assists, but had only one assist in the second half. Owen Pawlikowski added 13 [points for Kimberly (25-3). Tosa East got 11 points from Jay Hinson Jr. and 10 from Leon Bond, including a couple of huge dunks.

“I didn’t feel we took him out in the first half,” Arndorfer said of Paveletzke. “Man, he is an electric player who can hurt you in a lot of different ways. But we knew we had to stay in front of him, Early he would get deep and either to the rim or deep and then draw-and-kick. Some subtle adjustments by these guys in how they wanted to handle it.”

Now the Red Raiders get to handle the role of state champs, something that wasn’t predicted by many at the start of this strangest of all prep seasons, as Tosa East was coming off a 12-12 record and projected to be a middle-of-the-pack finisher in the Greater Metro Conference.

“There were a lot of times we were butting heads – me especially – but at the end of the day, we knew what we were going for,” Singleton said. “Obviously all that work and coming together as a team at practice has paid off.”