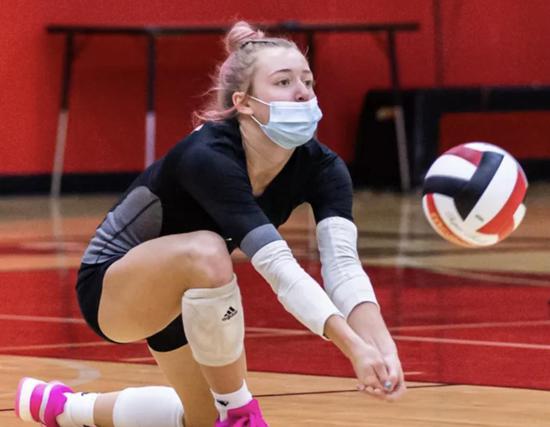 Volleyball Honors: Four-year letter-winner for the Pirates... coached by Anne Slattery... named team's most improved player as a freshman... as a sophomore and junior she received second-team all-Woodland West and selected as team's best offensive player... team captain as a junior and senior... as a senior was named team MVP, first-team all-Woodland West, first-team all-Woodland, Woodland West Player of the Year, and first-team WVCA All-State... finished her career fourth all-time at Pewaukee in kills (668) and third in block assists (102)... the 5-foot-10 outside hitter is committed to NCAA Division II Flagler College in St. Augustine, FL...

Basketball Honors: Three-year letter-winner for the Pirates... coached by Jim Reuter... as a junior, she helped Pewaukee to the program's first-ever WIAA state tournament apperance... senior year was selected as a second-team all-Woodland West performer... she averaged 8.3 points, 5.3 rebounds, 1.9 assists, and 1.8 steals per game for the 18-7 Pirates...

Favorite Sport (and why): "My favorite sport is volleyball because the feeling I get when I play is like nothing else. I forget everything going on in my life and I feel at home."

Best Advice from a High School Coach: "At the first practice of the 2021 season, Coach Reuter (basketball) lined us up on the end-line and told us that nothing is guaranteed. He told us to play every game and practice with 110% effort because--especially this year-- you never know when it can be taken away from you."

Most Memorable Moment in High School Sports: "The most memorable moment of my high school sports career was going to the 2020 state girls basketball tournament. Although we never got to play, winning sectionals and getting to travel with the team was an experience that I will never forget."

Best Part of Playing Three Sports: "The best part of playing three sports is getting to be a part of three completely different, highly competitive teams. Every team has its own dynamic and I bring something different to each program. I love being able to represent Pewaukee in more than one way."

Toughest Part of Playing Three Sports: "The toughest part of playing three sports is the conflictions. Having to tell a coach that you won’t be at a practice/game because of another sport and having to deal with the consequences or feeling like you let your team down."

Favorite Opponent (and why): "My favorite opponent in volleyball is Wisconsin Lutheran because the games are always super competitive and have been for my four years on varsity. Overall, I always enjoy playing New Berlin Eisenhower as well because of the rivalry that has been built between our teams. The games are always super hype and high energy."

Toughest Individual You’ve Competed Against (and why):

Volleyball- McKenna Wucherer from Brookfield Central. "It has been so fun to compete with her this club season, but Kenna is just a next level athlete when it comes to volleyball. She can pass well and can put the ball down in and out of system. She also has a very high competitive drive, which helps bring up everyone around her."

Basketball- Nikki Dienberg from New Berlin Eisenhower. "Just an explosive athlete who finds ways to score in the paint and around the arc, despite her height. Also a pesky defender and a great teammate."

Track- Jaiah Hopf from Wisconsin Lutheran. "The last time I competed against Jaiah she was only a freshman but she was breaking records left and right. She could triple jump in the boys division and still finish top three. I am so excited to see what she does for the rest of her high school career."

Most Admired High School Teammate (and why): "My most admired high school teammate is Valerie Wallace. After tearing her ACL the first time playing soccer in October 2018, Val showed an inspiring amount of determination to get back to doing what she loved (playing basketball and soccer). Then after tearing her other ACL in a basketball game against Kimberly in December 2019, Valerie was a phenomenal teammate and showed up to every practice and game eager to cheer and help her teammates out. Never once did I hear her complain about having to go to physical therapy or having to do rehab, and this basketball season, she was able to play sports for the first time in a long time, and bounced back better than ever. For this, I will always admire Val."

Activities Outside of Sports: "Hang out with friends and family, shop, and go on the lake."

I Find it Relaxing to: Tan outside in summer