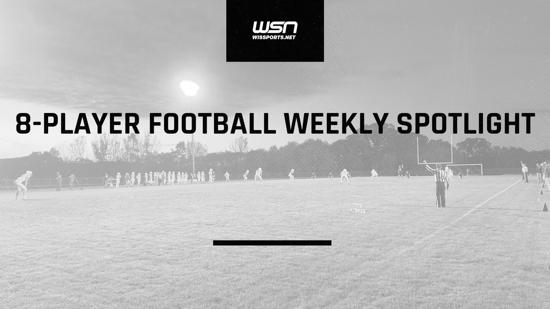 There were just four games in 8-player football last week, as most teams played in the fall, with a couple handfuls moving to the alternate spring season.

Oakfield was the top-ranked team in our WSN Preseason Rankings for this spring schedule, but the Oaks went down in the first game of the year, 28-22 to Wisconsin Heights. Heights first-year starting quarterback Derek Adler was very impressive, completing 19-of-33 passes for 370 yards and two touchdowns. Much of that went to De'Shawn Barsness, who hauled in nine passes for 245 yards and both scores. Garrett Kerl had 107 yards and two touchdowns on the ground for the Vanguards, who rolled up 481 yards of offense.The defense was solid, allowing just 3.9 yards per play and picking off Oakfield once.

Green Bay NEW Lutheran/Oneida ran all over Gibraltar in a 52-22 win, amassing 472 rushing yards and eight touchdowns. Marshal Bukowski led the way with 331 yards and three touchdowns on 32 carries, while Peyton Ponfil scored three times on the ground and Ali Gbaja-Biamila added a pair of scores.

In the first-ever official 8-player game for both teams, Wonewoc/Weston won a wild one over North Crawford 54-52, as Kaden Sprotte returned a kickoff 84 yards for a touchdown with 1:24 left to lift the Silver Wolves to victory. It overshadowed an incredible rushing performance by North Crawford, who ran for 609 yards and eight touchdowns. Junior Stephen Munson had 472 yards and five touchdowns, while Raiden Steele added 96 yards on the ground.

After a tough opening loss to Wisconsin Heights, Oakfield looks to get back on track this Thursday as the Oaks head to Sturgeon Bay. The Clippers opted into 8-player despite an enrollment near 400, and defeated Chequamegon 22-18 to begin the season.

After last week's wild 54-52 win against North Crawford, the Wonewoc/Weston co-op team welcomes in Kickapoo/La Farge on Friday in a game I intend to be at. Hopefully it is as exciting as last week's contest.

The lone Saturday game on the schedule features the Washburn/Bayfield program making the long trip to Sevastopol for a 1 pm kickoff.

There were a lot of options to pick from in Wonewoc/Weston's 54-52 win over North Crawford, including Stephen Munson's 472-yard rushing performance as well as Wonewoc/Weston quarterback Hunter Schmitt's 344 yards of total offense. However, I'll go with Wonewoc/Weston senior receiver Kaden Sprotte. He caught four passes for 124 yards and three touchdowns, which is impressive enough. But he gets the game ball for scoring the game-winning touchdown on an 84-yard kickoff return with 1:24 left in the game, after North Crawford had just scored to go ahead.