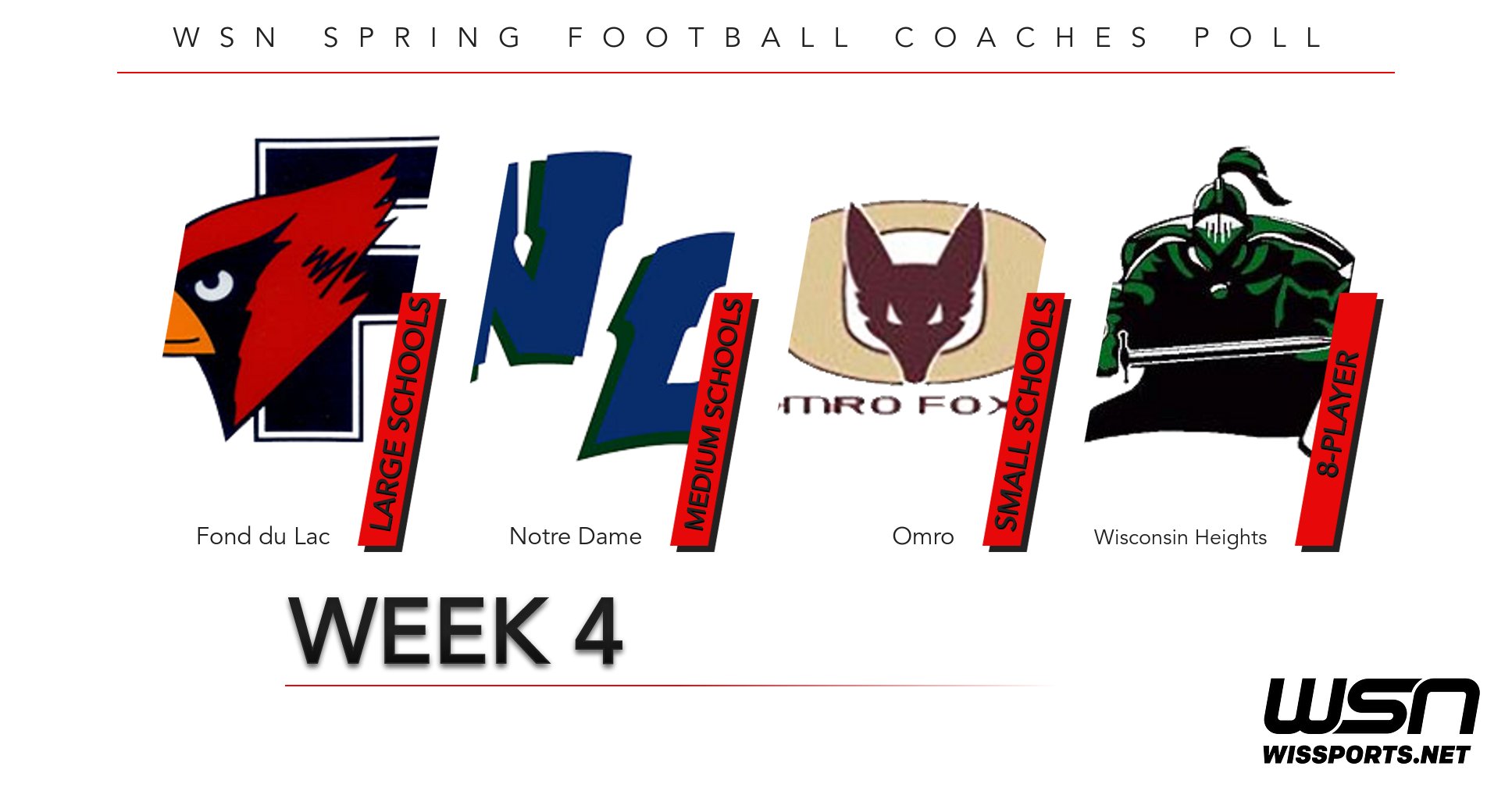 There will be no playoffs for the alternate spring football teams, which means there are no divisional placements. In an effort to continue to recognize the outstanding teams and players while placing and evaluating teams in somewhat like-sized groupings, we will be using Large Schools (1000+ enrollment), Medium Schools (999-400), and Small Schools (399 or under) designations.

After narrowly edging ahead of Kimberly for the top spot last week, Fond du Lac stretched its lead in the Large Schools Coaches Poll a bit this week, as the Cardinals continue to dominate all competition in the spring. Fond du Lac has a matchup this week with Bay Port, who dropped a second straight game in Week 4 and has dropped out of the coaches poll for the first time in more than half a decade. Appleton North makes a big move this week, going from seventh to fourth. It will be the fourth-ranked Lightning versus second-ranked Kimberly on Friday night. Middleton re-enters the rankings at number eight, while Neenah's win over Bay Port boosted the 2-2 Rockets into tenth.

Notre Dame remains on top of the Medium Schools Coaches Poll on WisSports.net, though several teams are starting to creep up on the Tritons. Greendale is again second, while Menasha moves up to third after an impressive win over Racine Horlick. Lodi and G-E-T round out the top five. A second loss this season for Stoughton, the latest against Milton, drops the Vikings out of the rankings this week. Monroe is the high riser in the Week 4 poll, going from ninth to sixth.

Omro solidified its spot on top of the Small Schools Coaches Poll with a running clock win over Mayville, who drops from sixth to eighth. Lomira is up one spot to third after a close win over Saint Mary's Springs, as the Ledgers fall three spots to sixth this week. Arcadia and Black Hawk/Warren (IL) break into the top five this week as well. Belleville is the only new team in the top ten, as Fennimore falls out of the poll.

Wisconsin Heights is the unquestioned number one team in the spring 8-player season, as the Vanguards just hammered previously third-ranked Kickapoo/La Farge 76-0 and also boast a win over second-ranked Oakfield earlier this year. Sturgeon Bay moves up to third this week, while Kickapoo/La Farge falls a spot to fourth. Despite a second loss, this time to Oakfield, Chequamegon remains steady at number five.