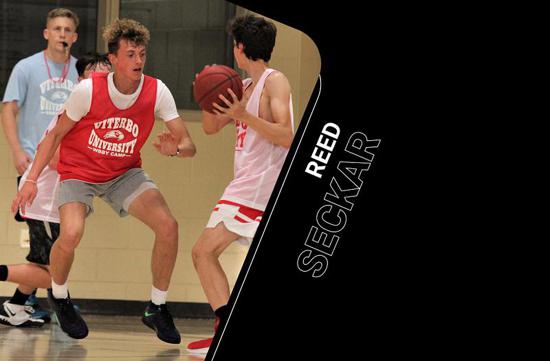 Reed Seckar doesn't have to go far in search of advice for his rapidly developing basketball game.

Like, maybe down the hall of his home in Oshkosh.

Seckar's father, Frank Seckar Jr., was an all-state point guard for Oshkosh North who graduated in 1992 and later spent four years as a key member of the Vanderbilt University men's basketball program.

Frank Seckar scored 1,317 career points and handed out 455 assists in 126 games at Vanderbilt, averaging 10.5 points and 3.6 assist over his stellar career.

Reed's prep career isn't littered with those type of accolades, but the 5-foot-11 point guard is starting to come into his own as he prepares for a senior season competing for coach Brad Weber at Oshkosh North.

And part of the credit for his impressive development, he says, should go to his father, who knows a thing or two about the game.

"I saw some tapes of when my dad played so I'm familiar with his game and how good he was," said Reed, one of just over 100 high school players from throughout the state competing this week at the Wisconsin Basketball Yearbook Camp at Viterbo University in La Crosse. "He offers me a lot of help and advice. Mostly about basketball IQ stuff ... how to read my teammates and get them shots and how to look for scoring opportunities of my own."

Seckar is coming off a junior season in which he averaged 8.5 points and earned honorable mention all-league recognition in the FVA.

At the WBY Camp, Seckar has shown the ability to lead his team, handle the ball with care, find open teammates with excellent passes and score from the perimeter.

He believes the Spartans can rank among the most improved teams in the 10-team FVA during the 2021-22 season.

"Last year, we were in a lot of close games, but we had a hard time closing out games," Seckar said. "I think, hopefully, we'll figure it out this season and win those close games."

Seckar possesses a 3.9 grade-point average and scored a 27 on the ACT exam.

He said he would like to play basketball in college and is being recruited by a number of NCAA Division III programs, including Carleton, MSOE, St. Norbert and St. Scholastica.

Kendon Krogman isn't a guy who likes to sit around doing nothing.

He loves basketball and wants to get the absolute most out of his opportunity to play the game.

Thus, the 6-foot-3 junior guard/forward from Regis High School in Eau Claire spends most of his free time working on improving his skill set and his physical strength and athleticism.

His strong work ethic and strong desire to get better are starting to pay dividends.

One of the biggest surprise players at the WBY Camp, Krogman has been a scoring machine for his team, which went 4-0 during games Monday morning and afternoon. He has scored off cuts to the basket, off of offensive rebounds, in transition and from three-point range.

His relentless nature and aggressiveness on both ends of the court are huge assets for his team and have not gone unnoticed by his camp coach and teammates.

"He's been a very pleasant surprise, one of the biggest in camp I would have to beleive," said Erik Wuensch, Krogman's coach at camp and also the head coach of the men's basketball team at Western Technical college.

After averaging 2.2 points and 1.8 rebounds as a freshman at Regis, Krogman improved to 13.2 ppg and 4.6 rpg as a sophomore. He earned second-team all-Western Cloverbelt Conference honors and credits his off-season workout for much of his success.

"The past off seasons, my goal was to make 30,000 shots and in order to do that I have to make 300 shots 100 different times," Krogman said. "I have a shooting routine I use to accomplish that goal.

Krogman did not start for the seventh grade team at Regis, but worked with his father (Kevin Krogman) and step-father (Bryant Brenner) during the summer between seventh and eighth grades in an effort to improve.

By eighth grade, Krogman was a starter. By sophomore year, he had earned all-league honors.

With his strong work ethic and love for the game, there's no telling where Krogman will end up over his next two seasons playing for the Ramblers.