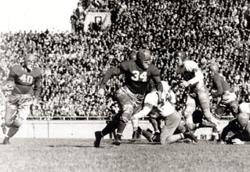 The Elroy "Crazylegs" Hirsch Award is presented annually to the state's top senior running back as part of the WSN Senior Football Awards. The award is named after former Wausau High School athlete Elroy "Crazylegs" Hirsch, who went on to play for the University of Wisconsin and the University of Michigan before starring at end in the NFL for 12 seasons. He is a member of the Pro Football Hall of Fame, the National High School Hall of Fame, and later went on to serve as Wisconsin's athletic director from 1969 to 1987.