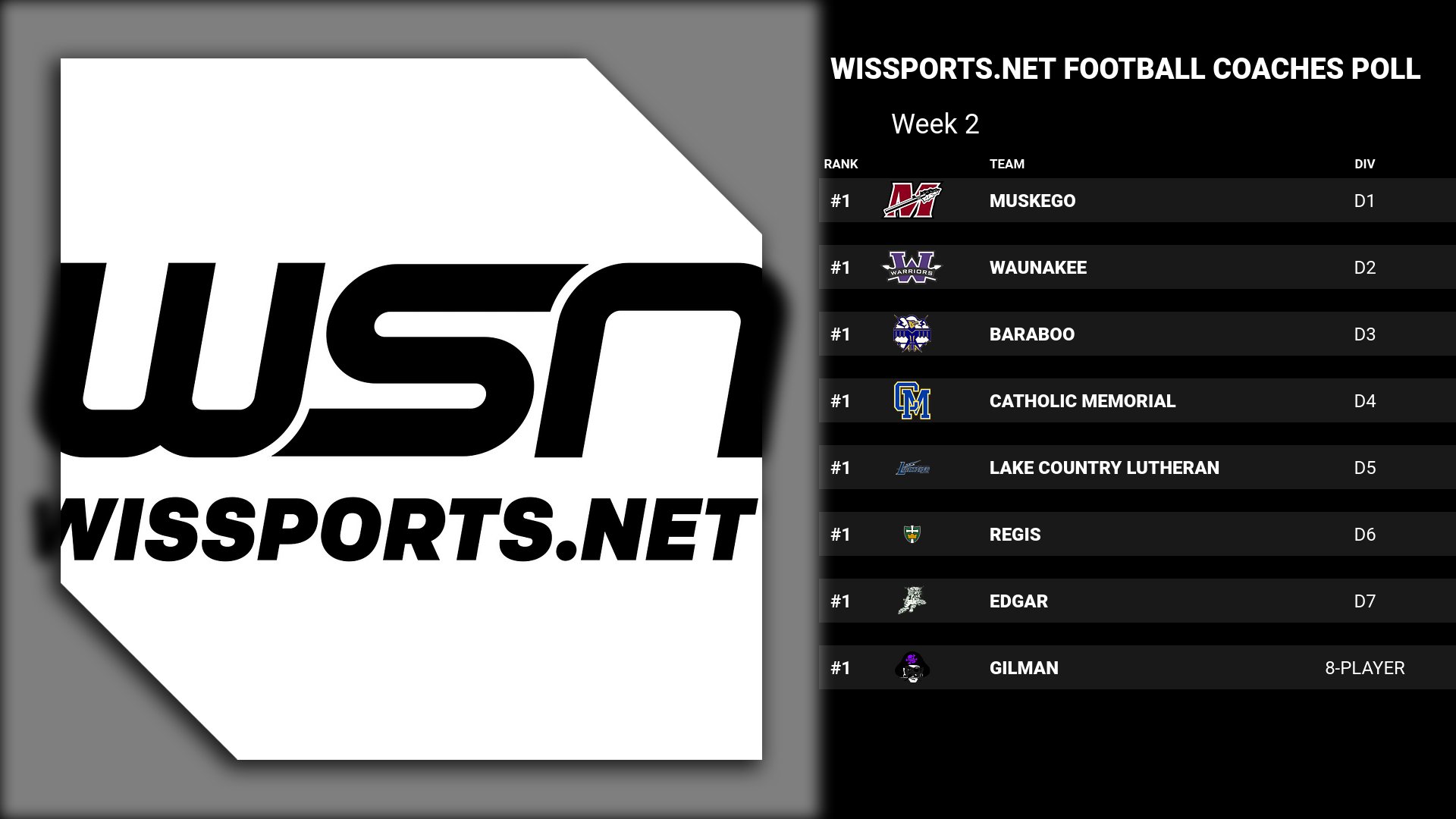 Muskego's winning streak is at 39 games, but the Warriors were precipitously close to getting knocked out of the top spot in the WisSports.net Division 1 Coaches Poll this week, as second-ranked Franklin is extremely close in the voting. Mukwonago makes a big jump from eighth to fifth after topping Division 3's number one team Whitefish Bay last week. Arrowhead drops from fifth to ninth after falling in a nail-biter to Homestead.

Waunakee remains the top-ranked team in the WisSports.net Division 2 Coaches Poll, as the Warriors are 2-0 against Big Eight members Madison Memorial and Middleton. Homestead's thrilling win over Arrowhead keeps the Highlanders at number two. In fact, the entire top ten is exactly the same as last week, something we don't see very often.

Top-ranked Whitefish Bay fell to Mukwonago and second-ranked Menasha went down to Neenah. Five different teams received at least one first place vote, but it was Baraboo that narrowly ascends to the top spot in this week's rankings. Whitefish Bay is second, followed by Luxemburg-Casco, Greendale, and Menasha in the top five. Mount Horeb/Barnveld, Plymouth, and New Richmond move into the top ten, as Stoughton, Grafton, and Rice Lake fall out of the poll.

Catholic Memorial continues its stranglehold on the Division 4 voting, as the Crusaders were a near unanimous top-ranked team. Ellsworth is second, followed again by Lodi. Edgewood makes a nice jump from seventh to fourth this week. Lake Mills and West Salem drop out of the rankings, as Northwestern and Freedom are new to the poll.

Lake Country Lutheran continues to look like one of the state's dominant teams, defeating Lakeside Lutheran 40-19, as the Lightning are once again atop the D5 poll. The top six is unchanged, with Division 5 one of the top groups in the state. Rounding out the top six after Lake Country Lutheran are Amherst, Cumberland, Stratford, Cedar Grove-Belgium, and Aquinas. Wittenberg-Birnamwood's impressive win over Iola-Scandinavia jumped the Chargers into the top ten.

Regis remains the dominant team in the Division 6 rankings, as Colby makes a jump up from fourth to second. Three other teams in the top five lost, as Mondovi (formerly #3) and Darlington (#5) fell out of the rankings completely. Iola-Scandinavia, who had been second in the rankings, narrowly held in at number ten after getting beaten soundly by Wittenberg-Birnamwood last week. New to the poll this week are Abbotsford (sixth) and Waterloo (ninth).

It was an interesting dynamic in Division 7, where top-ranked Edgar dropped a one-score game to a larger, ranked Stratford team. The voting was close, but the Wildcats managed to hang onto their number one ranking for this week. Bangor is second, but there were a number of other changes. Black Hawk/Warren (IL) dipped from third to sixth after falling to Marshall, while Lourdes Academy dropped five spots to number nine after a 40-0 shutout loss to Reedsville. Speaking of Reedsville, they jump from sixth to third.

8-player football got underway with the first games last week, and many of the top teams performed as expected. In fact, the top five remains the same from the preseason poll, with Gilman leading the way. In the bottom half of the rankings, Clayton, McDonell Central, and Saint Mary Catholic/Valley Christian all move in this week.