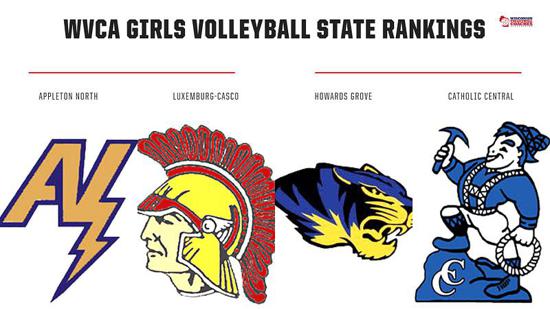 There were some huge matchups in the opening week of the conference slate for most teams and many that will have an impact on conference races down the stretch.

Despite some surprises, there were perhaps surprisingly no changes at the top of the WVCA Week 2 Coaches Poll.

Appleton North took home its second top ranking this season, despite dropping its FVA opener to Kimberly in five-set fashion. The Papermakers jumped from No. 8 to No. 4 this week. Brookfield Central also clung to the No. 2 spot, despite falling to GMC rival Germantown, which leapt to No. 5. League foe Divine Savior Holy Angels remained No. 3.

Luxemburg-Casco finished runner-up to Brookfield Central this weekend and remained as the top-ranked team in Division 2. Badger Conference foes Edgewood and Sauk Prairie remained right behind the Spartans in No. 2 and No. 3, respectively. McFarland and Fox Valley Lutheran flipped places to finish No. 4 and No. 5 in this week's poll.

Howards Grove landed in the No. 1 position in Division 3 again this week, edging No. 2 Fall Creek and the Crickets' impressive 19-1 overall mark in this young season. Lake Country Lutheran, Waterloo, and Randolph kept things exactly as they were one week prior rounding out the top five.

Catholic Central and Turtle Lake claimed the top two positions in the Week 2 poll again this week. Three Lakes moved up one spot to No. 3, replacing McDonell Central at No. 4. Potosi slid into the No. 5 spot to claim its first top-five ranking in Division 4.