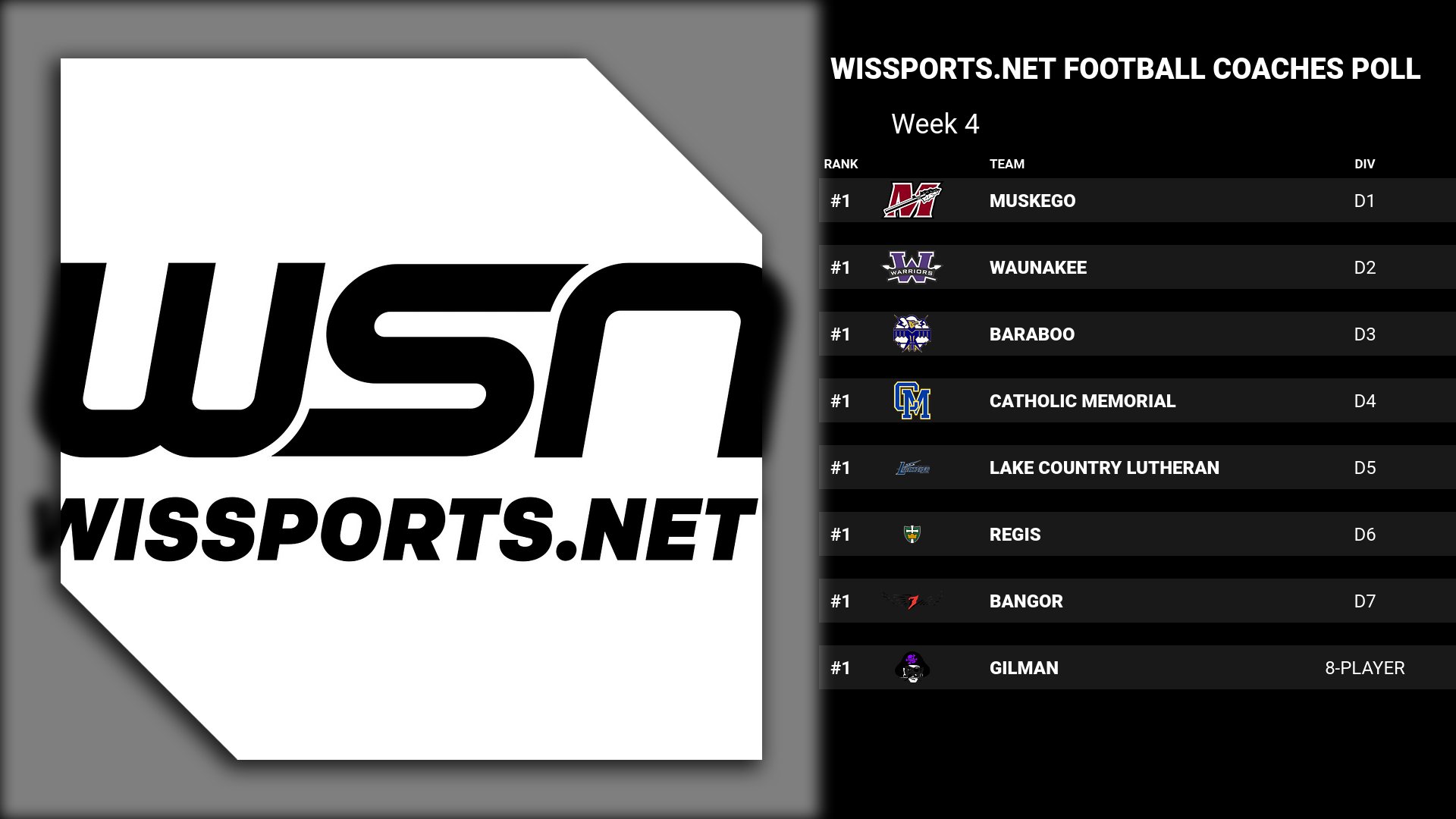 Following a pair of highly-anticipated top ten showdowns last week, there was some questions about how much change there would be in the rankings. Top-ranked Muskego ran its winning streak to 41 games with a 20-14 decision over Mukwonago, who stays at number five this week. Appleton North's second loss of the season, this one to third-ranked Kimberly after an opening defeat against second-ranked Franklin, did cause the Lightning to fall a bit, going from sixth to ninth this week. Sussex Hamilton moves into the rankings to replace Fond du Lac, who dropped its second game of the season against Neenah.

The top-ranked team in the Division 2 WisSports.net Coaches Poll is again the Waunakee Warriors, but there are other changes in the top five. Homestead was knocked off by Slinger, as the Highlanders fall from second to eighth, one spot behind the Slinger Owls. Menomonie's loss to Hudson tumbled the Mustangs to a tie for tenth with De Pere.

Baraboo survived against Stoughton last week, 17-0, but it was a costly one as star two-way senior Luna Larson left with injury. The Thunderbirds remain on top of the Division 3 Coaches Poll, though that hold could be tenuous depending on the prognosis for Larson. None of the ranked D3 squads lost, and there was just some minor shuffling of the top ten this week.

Ellsworth got a couple votes at the top, but Division 4 continues to be ruled by top-ranked Catholic Memorial. Not much changed in the rankings this week, with the top eight exactly the same as last week. Berlin went down to Port Washington, with the Indians falling out of the poll. Kiel remains undefeated and moves in at number ten.

Lake Country Lutheran is once again a strong number one in D5, which features an excellent group of ranked teams. Behind the Lightning, Amherst, Cumberland, Stratford, and Cedar Grove-Belgium round out the top five. Wittenberg-Birnamwood dropped a tough one against Amherst, as the Chargers fall to a tie for tenth this week with newcomer Durand.

Regis continues to dominate the Division 6 poll, but a great season by Colby, including a win over D7 top-ranked Edgar last week, has the Hornets on the heels of the Ramblers. Boyceville was hammered by Spring Valley 35-6, and it cost the Bulldogs big time, as the team went from third to out of the poll completely. Darlington makes a move into the rankings this week at number ten.

There was a big question in Division 7, where Edgar suffered its second loss of the season against Colby. Would the Wildcats remain in the top spot? The answer is no, as Edgar drops to third this week, allowing Bangor to ascend to number one. Reedsville is up to second, as the Panthers will travel to sixth-ranked Hilbert in a huge Big East Conference showdown this week. Pacelli moves in to the poll at number ten, as Black Hawk/Warren (IL) drops out.

All of the ranked teams claimed victories last week, as Gilman continues to be a strong number one in 8-player football. Saint Mary Catholic/Valley Christian shutout Kickapoo/La Farge 62-0 and moved up from ninth to fifth.