Derek Sweger of Deerfield selected as Packers Coach of the Week 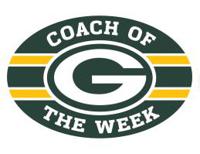 The Packers have announced that Derek Sweger of Deerfield High School in Deerfield, Wis., has been named the Green Bay Packers High School Coach of the Week.

Sweger, now in his sixth year as head coach of the Demons, strives to lead his players to become not only good football players, but more importantly, better members of their community. The team motto at Deerfield is, “You Before Me.” This motto is the driving force behind getting the players to put others first and to try and understand that everyone is going through different situations. To help illustrate this for his players, Sweger implemented an annual Awareness Game dedicated to educating his players and raising awareness of different illnesses affecting others.

“We want to show our kids there’s important things happening both inside of Deerfield and outside of the four walls of our little town,” Sweger said. “We partner up with an association and this year we worked with the Huntington’s Disease Society of America. We bring in somebody from the foundation to talk about what they do, how they help, what the disease is, what it’s like for people afflicted and then we have a captain for the game. Usually, it is a local family who is either afflicted themselves or know somebody who is, they talk about what the organization does for them and how they go through life. A lot of these things are really eye opening for the kids. The big thing that we preach is that just because you don’t see it doesn’t mean that somebody isn’t going through it. We’ve really tried to expose our guys to a lot of different things they may not have seen otherwise.”

Sweger graduated from Beloit Turner High School in Beloit, Wis., in 2001. Throughout high school, he participated in football and baseball. He played fullback, guard and defensive end under Coach Tom Brooks. Following high school, Sweger graduated from UW-Whitewater in 2011 and is currently studying for his masters from the University of Arkansas. Sweger’s coaching career began in 2008 where he was an assistant coach for four years at Johnson Creek High School. Before coming to Deerfield, Sweger was also an assistant coach at Hustisford and Dodgeland High Schools. In 2016, Sweger took over as head coach of the Demons.

Sweger was honored when he found out he was named the Packers Coach of the Week.

“It’s beyond humbling. You know you don’t get into coaching high school sports for the recognition or the money; you want to make kids’ lives better,” said Sweger. “There’s only a select number of professions where you get to shape, mold and impact young people and I don’t take that for granted. So anytime you have an outside source that is acknowledging that these things are happening, it’s humbling beyond measure. But you know it’s not a me thing. I can’t do it without the amazing administration we have here. And it’s really an award about the kids. We are so lucky to have the group of kids that we have here. Along with that is our staff. We have a phenomenal staff here who’s only desire is to put kids first and make sure they have the best experience possible.”

Sweger and his staff oversee a program of 31 players. His assistant staff includes Bene Lemke, Matt Rostowfske, Dylan Meehan, Jim Haak, Andrew Mulder, Larry Petroff, Sean Gjermo, Alex Fiske, and Zack Fiske. In addition to coaching, Sweger is also a special education teacher at Deerfield High School, and a physical education teacher for the middle and high school. Sweger and his wife, Melissa, have one daughter, Violet, and one son, Kolby.

The Green Bay Packers Coach of the Week program supports football outreach efforts by giving high school coaches the recognition they deserve. Nominations can be submitted by 10 a.m. every Monday to Ryan Fencl, Packers football outreach specialist, at coachoftheweek@packers.com. All nominations should include the nominee's name, address, school, phone number and reason he/she is deserving of the award. Continuing with last year’s format, the Packers are seeking coaches to be nominated regardless of their teams’ on-field performance. Rather, the nominee could be honored for how they have turned programs around, how the team has impacted the community, or how the coach impacts the players and their families.