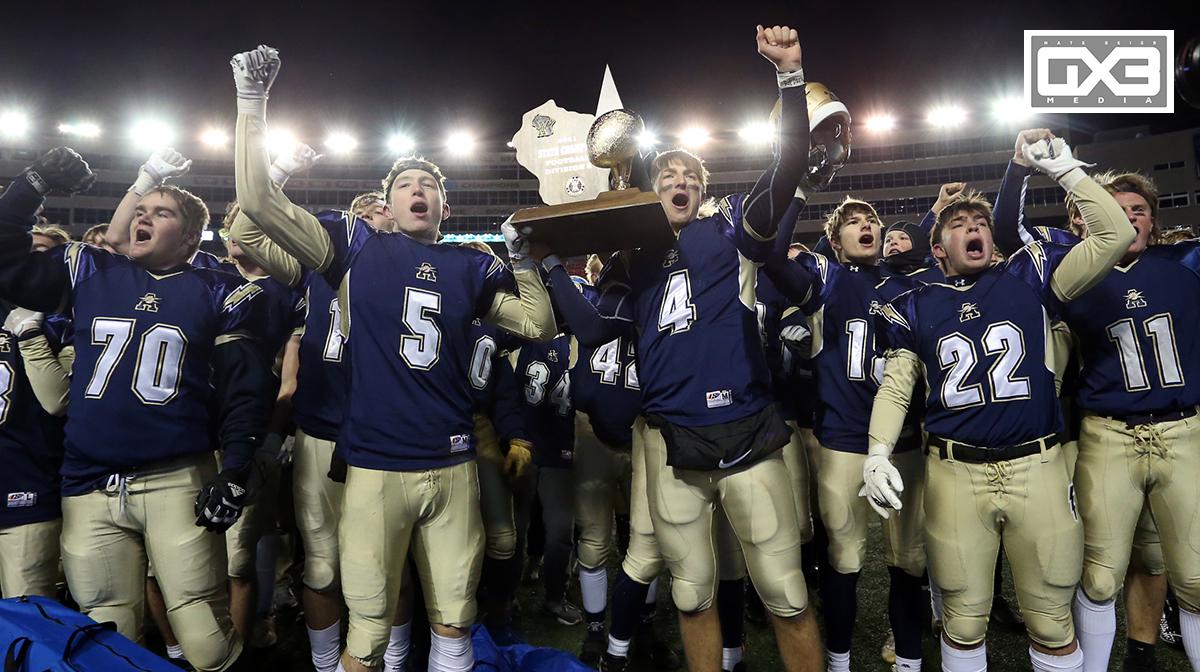 After going up 16-0 early in the second quarter, Aquinas had to rally in the third quarter and then survive a late two-point conversion attempt from Mayville to win 28-26 in the Division 5 state championship game at Camp Randall Stadium.

Aquinas scored on the opening drive of the game, marching 72 yards in nine plays as Jackson Flottmeyer found Quinn Miskowski from seven yards out.

Mayville turned it over on its first two possessions of the game, and the second led to an Aquinas touchdown when Joe Penchi punched it in from five yards out.

Aquinas converted two-point plays on both drives and took a 16-0 lead early in the second quarter. Mayville was able to hang tough, however, as Blake Schraufnagel got the Cardinals on the board from 21 yards out with just over four minutes remaining, and the Cardinals got a big touchdown by Schraufnagel from two yards out with just four seconds remaining in the first half to pull within 16-14 at the break.

Mayville took the lead with 5:43 to play in the third quarter when Ty Hockers capped off a drive with a one-yard plunge. It would be short-lived, however.

On the ensuing possession, Jackson Flottmeyer hit Quinn Miskowski for a 56-yard touchdown to put the Blugolds back in front 22-20.

The teams traded turnovers early in the fourth quarter, setting the stage for Mayville to put together an 8:08 drive that covered 88 yards in 16 plays, capped by Hockers scoring from three yards out with 1:41 remaining in the game.

The touchdown pulled Mayville within two points, but Ethan Schamberger and Calvin Hargrove combined for a huge stop of Schraufnagel on the conversion attempt and Aquinas recovered the ensuing onside kick attempt.

The Blugolds were able to run out the clock the rest of the way to secure the school's second WIAA state football title, joining a Division 5 crown back in 2007. Aquinas also won WISAA titles in 1993 and 1995.

Jackson Flottmeyer finished with 282 yards passing and two touchdowns, adding 23 yards and a score on the ground. Blake Schraufnagel ran for 205 yards on 38 attempts in a losing effort for Mayville.