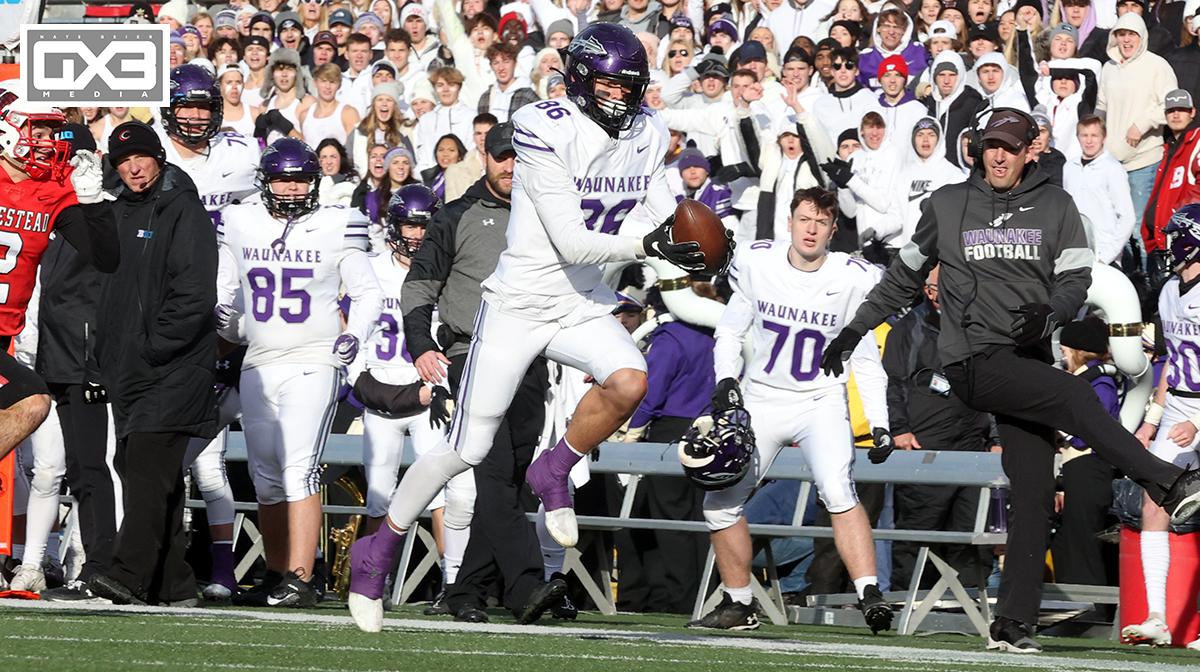 Despite four, first-half turnovers, the Waunakee Warriors held a two-score lead at halftime and closed out a 33-21 victory over Homestead to claim the Division 2 state championship.

The teams combined for six turnovers in the first half, including Waunakee's first two offensive drives, as Quentin Keene was picked off twice by Homestead. However, Homestead couldn't do anything with either of those turnovers.

Finally, Waunakee was able to hang on to the football and put together a scoring drive, with Keene finding All-State tight end Andrew Keller for a 34-yard touchdown.

It was a turnover battle after that, with Drew Mais picking off Homestead's Sal Balistreri before Peter James fumbled a few plays later to give the ball back to Homestead. Waunakee fumbled a punt return in the second quarter as well.

Not much came of it all, and it seemed we were in for a low-scoring first half. However, Homestead finally got on the board when Balistreri capped off a nine-play drive with a short touchdown run to pull within 14-7 of Waunakee with 2:12 remaining in the first half.

Ben Farnsworth returned the ensuing kickoff 97 yards for a new state finals record, and Waunakee would add another score before the break when Caden McCurdy intercepted a Balistreri pass and Michael Gnorski found pay dirt a few plays to give Waunakee a 20-7 halftime lead.

Homestead pulled within a score at 20-13 with 3:24 in the third quarter when Joe Ollman got in from 15 yards out.

Waunakee would respond quickly, as Mike Gnorski ran in from 24 yards out less than a minute later to put Waunakee back up by two scores.

The teams would trade lengthy touchdown drives after that, with Homestead going 71 yards in ten plays, as Sal Balistreri scored his second rushing touchdown of the game to make it 27-21 with 9:59 left in the game.

Waunakee answered with a 12-play, 76-yard drive that was kept alive when a third and long pass was short, but an unnecessary roughness penalty on Homestead kept the Warriors drive alive. They'd score later in the drive when Quentin Keene hit Andrew Keller for a one-yard touchdown to get it back to a two-score advantage with 3:02 left.

Homestead's final drive went into Waunakee territory but the Highlanders turned it over on downs and Waunakee kneeled out the win.

It is the seventh state title for Waunakee, all under Hall of Fame coach Pat Rice.

Joe Ollman ran for 124 yards and a touchdown for Homestead, who also got 94 yards and two scores on the ground from quarterback Sal Balistreri to go with 111 passing yards.