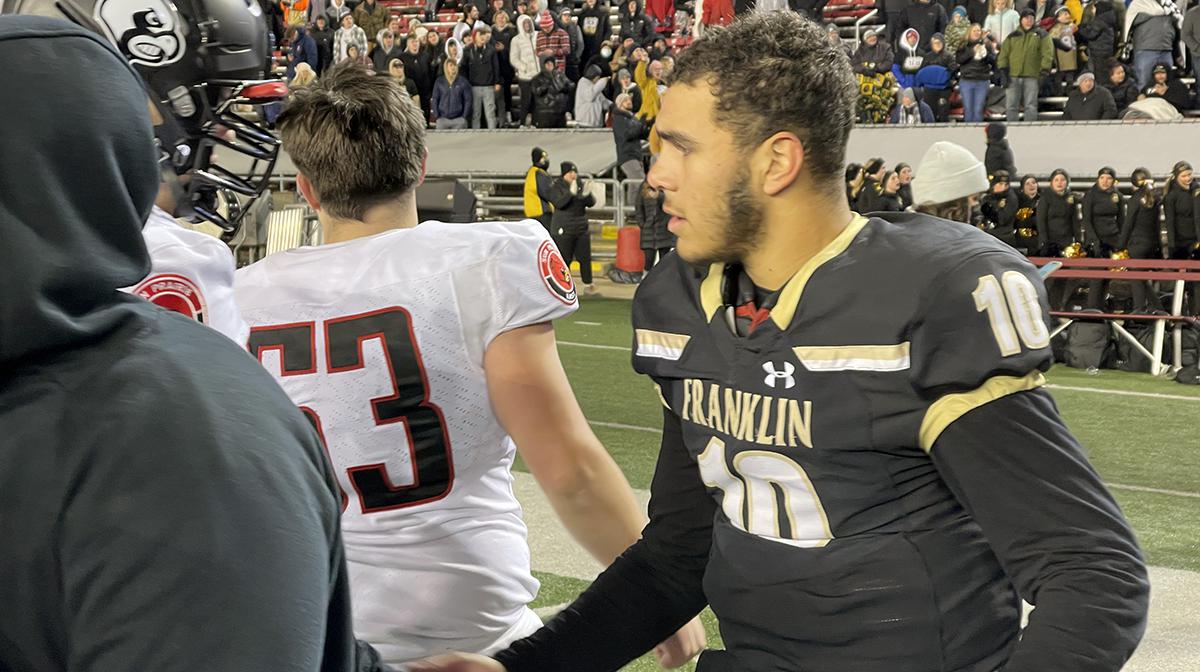 The teams traded field goals in the first quarter, the first by Franklin's Cooper Mueller from 33 yards out. After Tanner Schultz of Sun Prairie answered with a 34-yarder of his own, Franklin hit for the game's first big play.

Off of play action, future Badger quarterback Myles Burkett hit Reese Osgood racing down the middle for an 88-yard touchdown strike in the closing part of the first quarter.

Later in the second quarter, Terrance Shelton closed out a Franklin scoring drive with a six yard touchdown scamper. The big play on the drive was a 39-yard run by senior Tanner Rivard, who finished with 140 yards on 32 carries for the Sabers.

Rivard would add to Franklin's lead early in the third quarter, as his one-yard touchdown run put the Sabers up 24-3 and seemingly in control of things.

However, Franklin took its foot off the brakes a bit. While the defense forced a three-and-out, on the next Sabers' offensive possession, Burkett was hit as he threw and the floating pass was picked off by Michael McMillan.

Franklin would go three-and-out, and Sun Prairie scored its second touchdown in less than five minutes when Kaminski rushed for four yards, as the Cardinals pulled within one score at 24-17.

Franklin would dominate the fourth quarter, however, ensuring there would be no Sun Prairie heroics. Burkett connected with Osgood again, this time from 30 yards out, as the Sabers' lead was back at two scores with 7:55 remaining in the game.

Sun Prairie went nowhere on its next drive, and facing a fourth and ten from its own 26-yard line, the Cardinals elected to punt.

That decision would not pay off, as Franklin controlled the ball for 6:43, going 67 yards in 14 plays, capped off by a seven-yard touchdown pass from Burkett to Keaton Arendt to put the game away.

Sun Prairie junior quarterback Jerry Kaminski had his share of struggles, completing just 14-of-32 passes with two interceptions, but he did manage to throw for 136 yards and a touchdown, adding 20 yards and a score on the ground as well.