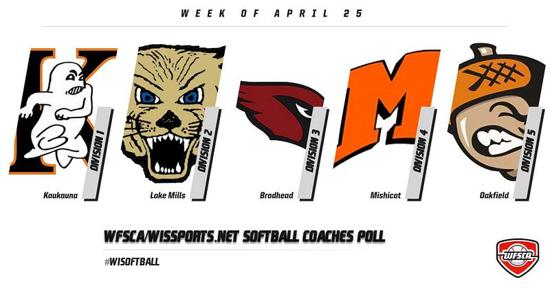 Top-ranked Kaukauna moved to 5-0 on the season after defeating Elkhorn 12-2 on Monday. Sun Prairie, Oak Creek, Hortonville, and Chippewa Falls round out the top five of the Division 1 WFSCA/WSN Coaches Poll. Bay Port joins the top 10 while Stevens Point drops out of the rankings.

Lake Mills remains No. 1 in the Division 2 standings and is now 9-0 on the season. The rest of the top five of the WFSCA/WSN Coaches Poll features New London, Freedom, Luxemburg-Casco, and Jefferson. Joining the top 10 are Winneconne and Whitnall while New Berlin West and La Crosse Logan dropped out of the rankings.

Brodhead holds down the top spot in the Division 3 WFSCA/WSN Coaches Poll with an 11-1 record. Joining them in the top five are Baldwin-Woodville, Lakeside Lutheran, Poynette, and Prescott. New to the top 10 is Campbellsport while Mayville dropped out of the rankings.

Mishicot (5-0) remains No. 1 in the Division 4 WFSCA/WSN Coaches Poll. The rest of the top five includes Boscobel, Grantsburg, Deerfield, and Phillips. New to the rankings are Bonduel and Random Lake while Iola-Scandinavia and Princeton/Green Lake drop out of the top 10.

Top-ranked Oakfield moved to 5-0 on the season after routing Montello, 16-0, on Monday. Joining the Oaks in the top five of the WFSCA/WSN Coaches Poll are Blair-Taylor, Assumption, Barneveld, and Highland. Barneveld made a big jump after not being ranked in the first coaches poll. All five of the Golden Eagles' losses are against out-of-state opponents. Juda/Albany dropped out of the rankings.