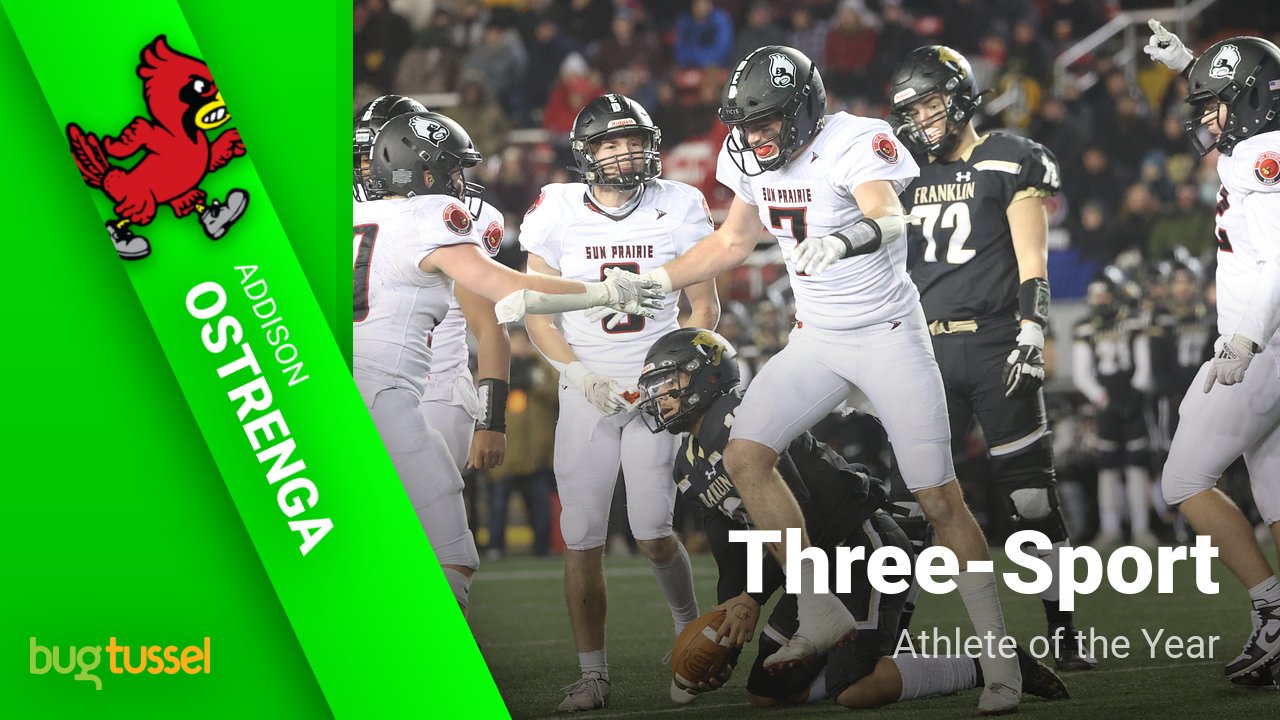 Addison Ostrenga of Sun Prairie has been selected as the 2021-22 male recipient of the Pat Richter Award from WisSports.net as the Bug Tussel Three-Sport Athlete of the Year.

The goal and mission of Bug Tussel is to level the playing field for rural residents despite where they may live. Whether you work from home, your office is downtown or you are manning the family farm, they believe residents should be connected without having to compromise speed, price, quality, service or the environment.

Ostrenga competed in football, basketball and baseball for Sun Prairie in the school's final year as a single high school in the ever-growing city. In 2022-23, Sun Prairie splits into two high schools -- Sun Prairie East and Sun Prairie West.

In football, the 6-foot-5, 225-pound specimen helped Sun Prairie to a 7-0 record and the league title in the Big Eight Conference while also aiding the Cardinals to a 14-1 record and runner-up finish in the WIAA Division 1 playoffs. He caught 46 passes for 664 yards and eight touchdowns while earning first-team all-league honors at outside linebacker and second-team laurels at wide receiver.

In basketball, Ostrenga averaged 12.0 points per game during his senior season, his third with the varsity squad at Sun Prairie. The honorable mention all-Big Eight Conference performer helped the Cardinals to a 17-10 record and a WIAA Division 1 sectional-final appearance. He scored a career-best 27 points in a 72-69 loss to Janesville Craig last winter.

On the baseball diamond, Ostrenga played a big role in Sun Prairie's drive to the Big Eight title. The first-team all-league infielder led the team in hitting at .441 while also hitting two home runs, driving in 43 and helping at times from the mound.

When Ostrenga was featured on WSN in October he said his most memorable experience as a high school athlete was winning the WIAA Division 1 baseball title in 2021.

"Winning the 2021 baseball state championship, definitely an experience I will never forget."

Ostrenga is signed to play college football for the University of Iowa Hawkeyes.

To view our initial profile of Ostrenga as part of our Bug Tussel Triple Threat Athlete of the Week series, click here.