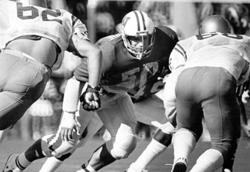 The Tim Krumrie Award is presented annually to the state's top senior defensive lineman as part of the WSN Senior Football Awards. The award is named after Tim Krumrie, a former Mondovi and University of Wisconsin athlete who would go on to star in the NFL for 12 seasons, including two Pro Bowl appearances.

The pre-season list will be trimmed down to 25 semi-finalists halfway through the year, with five finalists chosen at the start of the playoffs. Winners are announced the week of the state finals.