Many high school football standouts in Wisconsin go on to big things at the college level and in the pros, and this is our spot to recognize those athletes each week and help you keep up with what is going down on some of your favorite players from the past. If you have alumni news, please send it to Colton Wilson 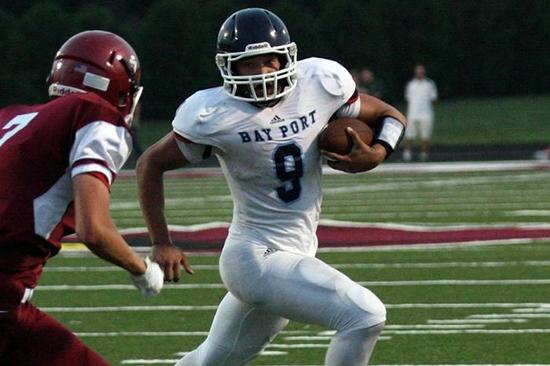 Every year a new crop of former Wisconsin high school football standouts realize a dream of playing in the NFL. This year we see more of the same.

Leo Chenal, a Grantsburg and UW-Madison alum, left Wisconsin a year early in pursuit of his NFL dreams. Taken in the third round of this past April's draft by the Kansas City Chiefs, Chenal achieved those goals. In a 27-24 week 2 win over the Los Angeles Chargers, Chenal saw his first NFL action. He recorded two tackles on 22 defensive snaps.

Like Chenal, Henningsen was a standout at UW-Madison and a grad of Menmonee Falls high school. Also like Chenal, he is a rookie in the NFL and saw his first action for the Denver Broncos this past weekend. In a 16-9 win over the Houston Texans, Henningsen recorded his first NFL tackle in his first game.

Though not rookies, the next group of alumni missed most of the NFL season last year due to injuries.

J.J. Watt has put together a Hall of Fame career and after missing ten games last season, the Pewaukee native is back for a twelfth NFL season. Sitting out week 1 with a calf issue, Watt recorded his 103rd career sack in a 29-23 thrilling overtime win against the Raiders. The three-time Defensive Player of the Year added a quarterback hit and pass deflection.

Alec Ingold suffered a torn ACL last season with the Las Vegas Raiders. This season the Bay Port grad plays fullback for the 2-0 Miami Dolphins. Through two games, he has been a steadying force for the high octane Dolphin offense and has three rushes and four catches through the first two games.

Like Watt and Ingold before him, the 2021 season was derailed by injury for former Stevens Point high school grad Ryan Ramczyk. He is back starting for the New Orleans Saint's offensive line. This past weekend, Ramczyk started his 75th NFL game, all with the Saints.

It would be remiss not to mention Pewaukee grad and reigning NFL Defensive Player of the Year T.J. Watt. The Pittsburgh Steeler outside linebacker and best defensive player in the game suffered a torn pectoral muscle in the first game of the season and will miss the remainder of this year. Like his brother, TJ will bounce back from this and be a terror in opposing backfields in 2023. 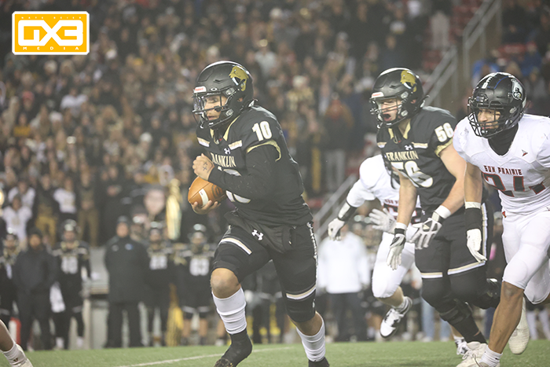 The Wisconsin Badgers roster is filled with former high school football standouts from around the state. Here's how some have faired through three weeks.

Keeping pace with last season has been the story for Fond du Lac grad Braelon Allen. The 2021 breakout freshman has 50 carries for 332 yards and five touchdowns through the first three weeks for the Badgers.

Chimere Dike had high expectations coming into this season as the primary receiver for Wisconsin. The Waukesha West alum has tallied nine catches for 172 yards, both team leading, and a score.

A few freshman who have seen action this season are Jackson Acker and Myles Burkett. Acker, a Verona grad and redshirt freshman, is the starting fullback for the Badgers and recorded his first catch this past weekend. Burkett, a Franklin grad and true freshman, has seen action in the two blowouts by the Badgers and completed four of five passes for 84 yards in those appearances.

CJ Goetz is in his fifth season at Wisconsin and has earned a starting spot on the defense. In the blowout win of New Mexico State, the Catholic Memorial grad had a team high six tackles, including one and a half for loss.

The state of Wisconsin is known for its export of offensive lineman. Many of those stay at home for the in-state Badgers. Both Tyler Beach of Port Washington and Jack Nelson of Stoughton have held down the left side of the offensive line through the first three games. This past weekend Kewaunee grad Tanor Bortolini and Kettle Moraine grad Trey Wedig stepped into the right side of the line and will look to hold those sports for Badgers moving forward. 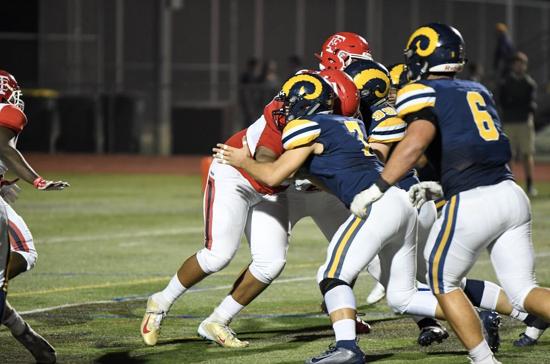 The Big 10 Conference is home to 39 other players from the state not on Wisconsin's roster.

Like Biber, Max Grand from Ellsworth took advantage of his playing time in a blowout for a Big 10 team. Grand recorded his first collegiate carries for Minnesota in a 38-0 shutout of New Mexico State.

Isaiah Gash and Max Bredeson took advantage of Michigan blowing out its opponents as well. Gash, a Bay Port grad, had three carries for 48 yards and his first ever touchdown in a 56-10 win over Hawaii. Bredeson, an Arrowhead alum, hauled in a 58 yard catch in that game, a week after recording his first ever college catch.

The Ivy League had a pair of former Wisconsin football standouts record their first ever college touchdowns.

Joey Giorgi is a junior running back at Columbia University and in week one of Ivy League play, started his first game. In the 38-3 win over Marist, the Grafton grad recorded his first career carries, 16 of them, for 106 yards his first college touchdown.

Like Giorgi, William Enneking was seeing his first extended college football action for Cornell University. In a 28-22 win over VMI, the Sussex Hamilton alum recorded a pair of catches, his first in his career. Both of those catches resulted in three yard touchdowns.

North Dakota topped Northern Arizona 27-24 this past week in a thrilling matchup. Kewaskum alum Cade Peterson's leg proved to be a difference maker. He punted the ball four time for 209 yards, including three punts over 50 yards. Peterson was named the Missouri Valley Conference Special Teams Player of the Week. Teammate and La Crosse Logan alum CJ Siegel was a difference maker on the defensive side of the ball, returning an interception 50 yards for a score in the second quarter.

A pair of Cumberland grads are making plays at the wide receiver position for a pair of FCS schools.

Lindenwood made the jump from Division 3 to Division 1-FCS this season and Payton Rose has continued to tear up opposing defenses. In a 37-3 win over Keiser University, Rose hauled in seven catches for 180 yards and a score.

Fellow Cumberland grad Jack Martens is in his second season at South Dakota. In last week's 38-21 win over Cal Poly, Martens recorded his first career touchdown in just his third game. Martens had two catches for 79 yards, including the 70 yard score.

The Northern Sun Conference is filled with mainly Minnesota schools that feature a lot of Wisconsin high school football alumni.

Clay Schueffner was a First Team All-Northern Sun linebacker last season and this year he only leads the conference in tackles. Schueffner, a St. Mary's Springs grad, has tallied 37 tackles through three games for the Warriors.

Onalaska grad Jalen Sample has been a standout wide receiver for Minnesota State-Mankato for the past few seasons. He opened up the 2022 season by hauling in six catches for 92 yards and two scores, including the game winner, in a 37-34 win over Bemidji State. Sample was named the Northern Sun Offensive Player of the Week in week 1. Sample has 17 catches for 242 yards and three scores through three weeks of the season.

Marquon Williams transferred from Mankato last season to Lock Haven College where he has started the 2022 season off with a bang. The Kenosha Bradford grad has eight catches for 123 yards and three scores through three contests.

Michigan Tech has many former Badger State alumni on its roster, including the Great Lakes Intercollegiate Athletic Conference tackling leader Marc Sippel. The Wausau West grad has 35 tackles, six for loss, one and a half sacks, a forced fumble and two fumble recoveries through three games.

The WIAC is one of, if not the best Division 3 football conference in the country. Each week their Player of the Week articles are littered with former alumni.

In week 1, UW-Oshkosh throttled East Texas Baptist University 52-13. Quarterback Kobe Berghammer completed 13 of 24 passes for 254 yards and four scores, adding two more touchdowns on the ground. The Cumberland grad was named the WIAC Offensive Player of the Week. On the season, Berghammer has thrown for 742 yards and seven touchdowns and added five scores with his legs.

UW-La Crosse eked out a 28-21 win over Division 2 Wayne State in week 3 and Holmen's Adam Quam made a pair of stellar plays on the special teams side of the ball. Quam blocked a pair of field attempts on back-to-back possessions that would have been go ahead scores during the third quarter. He was named the WIAC Special Teams Player of the Week.

Like Quam, Brycen Chasin was a difference maker on special teams for UW-Stevens Point despite a 31-24 loss to Mayville State in week 1. The Pacelli grad returned the opening second half kick 98 yards for a score and even added a rushing touchdown for the Pointers. Cashin also earned WIAC Special Teams Player of the Week honors, but in week 1.

Special team honors seems to be the trend this week as Waunakee grad Aidan Driscoll did it with his leg this past week in Loras College's 38-35 win over Central College. Driscoll tallied five punts for 206 yards but saved the heroics for the final play. As time expired, Driscoll nailed a 37 yard, game-winning field goal en route to earning American Rivers Conference Special Teams Player of the Week.

Keeping with the player of the week trend, Damean Netzler was all over the field in Ripon College's 33-6 win over Knox College. The Wautoma grad had eleven tackles and two and a half tackles for loss for the Red Hawks. He was named the Midwest Conference Defensive Player of the Week. Netzler has tallied 24 tackles, five tackles for loss and a sack in three games.

The football season is just getting started and many former alumni not mentioned here have already made big plays, turned in big games and are key contributors for teams across all levels across the country. Though not mentioned in this week's edition, stay tuned in future editions of the Football Alumni Round-up for those that continue to excel on the gridiron.