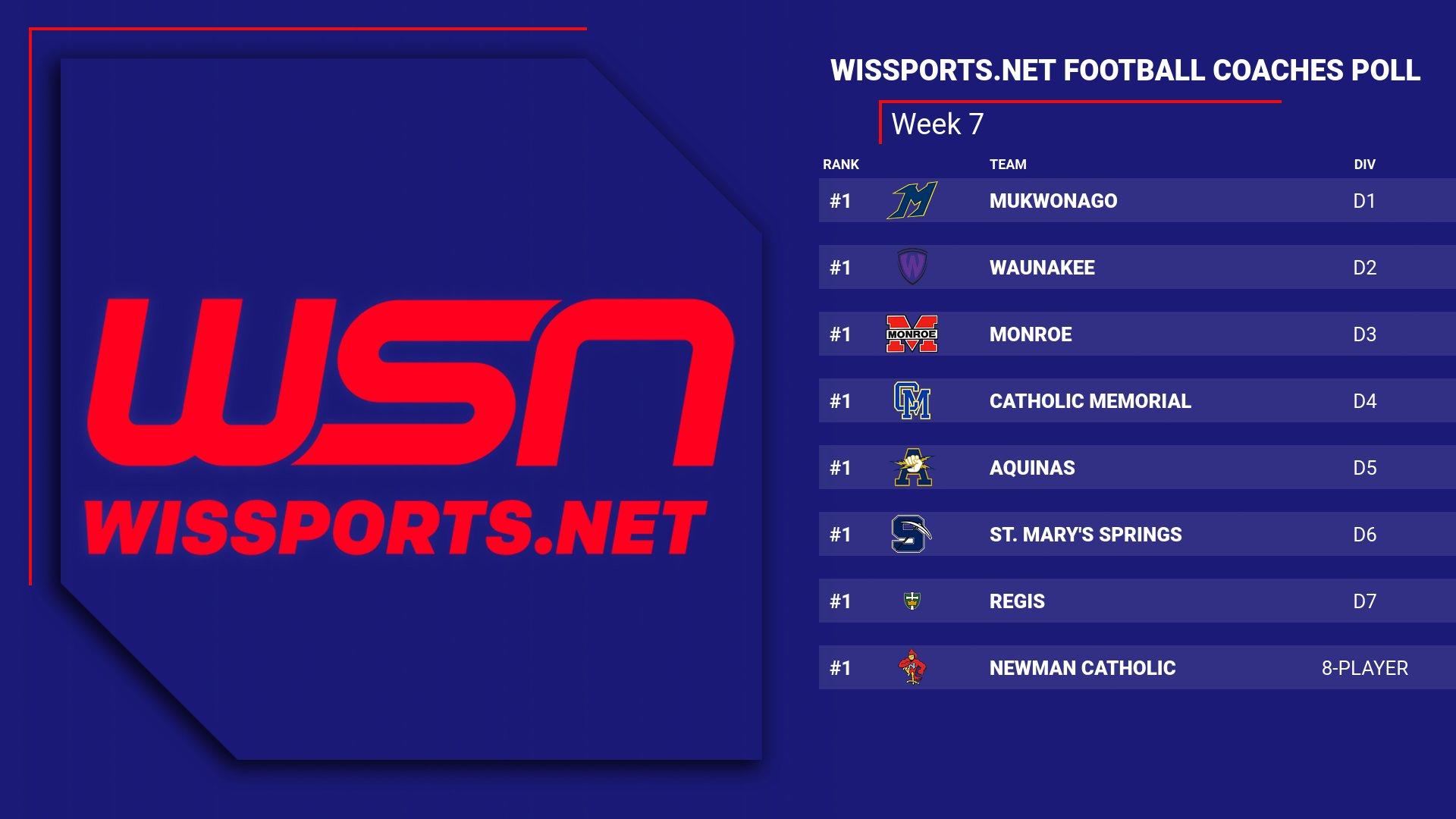 Mukwonago was pushed hard by Oconomowoc last week, but the Indians rallied to win 28-25 with a game-winning touchdown in the final 30 seconds. It keeps the Indians first this week, but former number two Kimberly went down to Fond du Lac, as the Papermakers fall from second to fifth. In a top ten showdown, Muskego defeated Arrowhead, with the Warhawks dropping to eighth from sixth.

Waunakee continues to dominate the Division 2 field, with Badger-Large foe Sun Prairie East the second-ranked team. River Falls' shocking overtime loss to Chippewa Falls dropped the Wildcats from third to sixth. Also falling was Racine Horlick, who lost a close game to Franklin, dropping the Rebels a couple spots to ninth. Kaukauna falls out after a third loss, with New Richmond re-entering the poll.

Monroe, Onalaska, Menasha, and Pewaukee remain the top four teams in the Division 3 rankings, though New Berlin West drops out of the top five after losing to Pewaukee. The Vikings are eighth this week, one spot ahead of rival New Berlin Eisenhower, who West beat a few weeks ago. Reedsburg jumps from ninth to sixth after defeating rival Baraboo. Grafton moves into the poll this week, replacing Fox Valley Lutheran.

Catholic Memorial is number one, with Columbus number two. After those teams, there was considerable movement in the rankings. Freedom fell to Little Chute, and the Irish dropped from third to sixth, while Little Chute makes a big jump from eighth to third. Berlin went down to Kewaskum, dropping out of the rankings, while Adams-Friendship's impressive win against Brodhead/Juda has the Green Devils finally breaking into the rankings, tied for tenth with Baldwin-Woodville. Also, Lodi fell to Columbus and slip to ninth this week.

Aquinas is still the number one team in Division 5, though Mayville did grab a few top votes as well. Brodhead/Juda lost its first game of the year to Adams-Friendship, and the Cardinalstumble three spots to sixth this week. Northwestern is third, followed by Colby and Kewaunee. Losses from University School and Lancaster caused those teams to fall out of the rankings, with Marshall and Amherst moving in.

Saint Mary's Springs is the number one team in Division 6 once again, and this could be a historic week for the Ledgers' program, as legendary head coach Bob Hyland will go for career victory number 500 on Saturday at Lomira. Mondovi's running clock loss to Regis dropped the Buffaloes from third to eighth this week, with everyone else moving up one spot.

Regis solidified its spot at the top of Division 1 with a running clock victory over D6 third-ranked Mondovi. There were few changes in the poll this week, with former #10 Black Hawk/Warren (IL) going down to Potosi/Cassville, with the Chieftains taking the spot of the Warriors.

Not much change in the 8-player rankings this week, as Newman Catholic is the heavy favorite atop the poll, followed by a top five of Saint Mary Central/Valley Christian, Owen-Withee, De Soto, and Thorp. Lena/St. Thomas Aquinas suffered its first loss, to eighth-ranked Gibraltar, and the co-op program dropped out of the poll this week. Florence enters at number six.