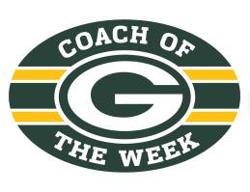 The Green Bay Packers have announced that Nick Stormoen of Adams-Friendship High School in Adams, Wis., has been named the Packers High School Coach of the Week. The program is presented by Buffalo Wild Wings.

Stormoen, in his 12th year as the varsity head coach of Adams-Friendship, led the Green Devils to a 25-13 victory over the Brodhead/Juda football program on Friday, Sept. 30. Heading into the game, Brodhead/Juda was ranked third for Division 5 in the WisSports.net Football Coaches Poll. The victory keeps the team’s season perfect, bringing their record to 7-0. While the team continues to succeed on the field, they are also making a big impact away from the Friday night lights.

“Because the school district is a little transient, we have quite a bit of teacher turnover,” said Stormoen. “To get the kids out in the community, there’s teachers that ask me for help from the guys when they need to move in or out. We’re also doing a school-wide day of service where the football players are all going to be on a bus wearing their jerseys, going to town and raking leaves for people that are unable to do so themselves. It’s important to get [the players] out in the community because these are people that they’ve known their whole lives and given them a lot of support and it’s important to have those guys give back.”

Stormoen grew up in Cudahy, Wis. He attended Cudahy High School, where he participated in football and baseball. As a member of the Cudahy Packers, Stormoen played safety and wide receiver for Wisconsin Football Coaches Association Hall of Fame members Carey Venne and Jeffrey Cavanaugh. Following his graduation from Cudahy in 1999, Stormoen went on to receive his bachelor's degree in Social Studies from the University of Wisconsin-La Crosse in 2004.

Stormoen is honored to win the award and views it as a symbol of the brotherhood of both past and present Green Devils.

“I appreciate the award, and I appreciate the accolades, but really, it’s the kids that do all the work. And I couldn’t do it without my wife taking over all the family stuff,” said Stormoen. “I’m surrounded by great people and I get to be the face of it, but it’s really a team and group award. I like winning football games just as much as anyone else, but to hug a kid after a big game and see the smile on their face is just as valuable. To look back in the stands after a homecoming win and see years of graduates and the impact they’ve made. At the end we break down and say ‘family,’ and I really take that to heart because I love these guys like family.”

The Packers will recognize one outstanding high school coach as their ‘Coach of the Week’ winner during the 2022 high school football season. Winners are awarded several items and privileges, including a $2,000 donation to the school’s football program from the Green Bay Packers, Buffalo Wild Wings and the NFL Foundation, as well as recognition of the award on Packers.com, Wissports.net and Wifca.org. Nominations for Coach of the Week should be submitted by 10 a.m. every Monday to Ryan Fencl, Football Outreach Manager, at coachoftheweek@packers.com. Please include the nominee’s name, address, school, phone number and reason he/she is deserving of the award.