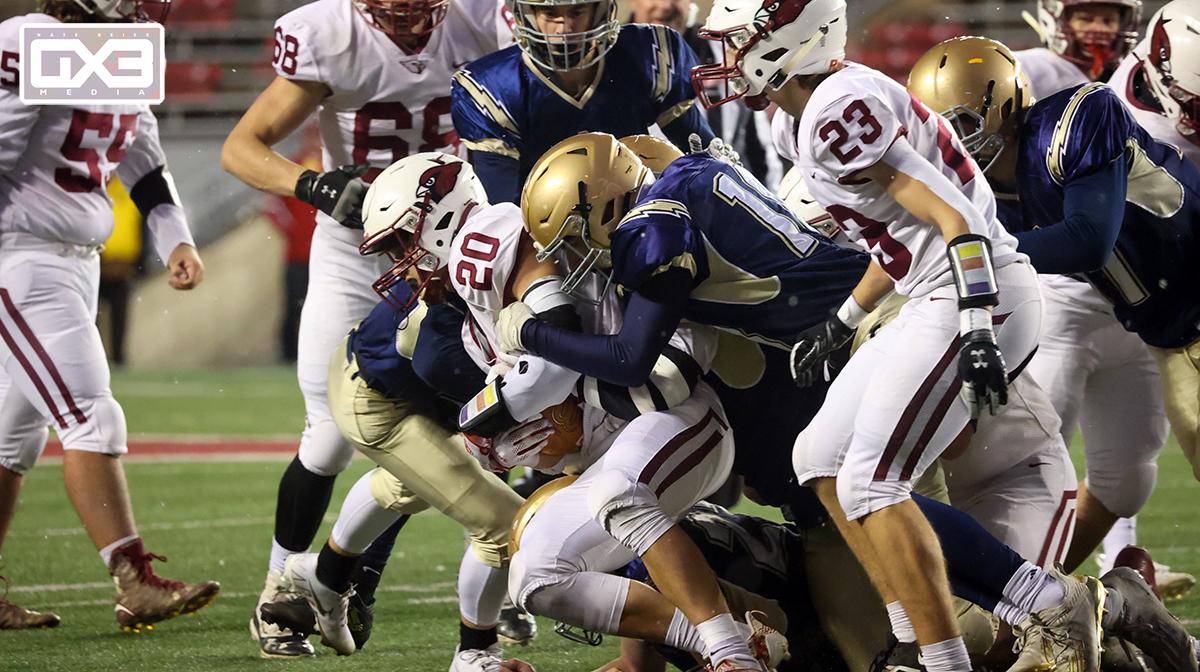 Last week I went 11-4 in picking the state semi-final and 8-player championship contests, giving me an overall record of 184-41, good for a 81.8% prediction rate. Here's my picks and breakdown of each of the state title contests.

Mukwonago was our number one team in the preseason and spent much of the year atop the Coaches Poll, with impressive wins this season over Sussex Hamilton (twice), Sun Prairie East, and Muskego (twice). The only loss was to Kettle Moraine, a state finalist in D2, late in the year, and in some ways it seemed to take the pressure off the Indians. Behind All-State running back Wynn Stang (2,761 yards) and a strong defense, Mukwonago is in the state finals for the first time since its only championship in 2004. Kimberly has been a fixture at state over the last 15 years, as the Papermakers are making their 10th title game appearance since 2007. After five straight titles from 2013 to 2018 and a runner-up finish in 2019, Kimberly is back again with a new coach, first year head man Chad Michalkiewicz. The team avenged its only loss of the season by beating Fond du Lac to open the playoffs, then scored a thrilling victory over Neenah before back-to-back wins over state heavyweights Waunakee and Bay Port.

Kettle Moraine finished tied for third in a brutally tough Classic Eight Conference but dropping down to Division 2, has relied on a suffocating defense to advance to the state title game for the first time since winning it all in the only previous trip in 1988. After dispatching Milton and league Waukesha West to begin the playoffs, the Lasers dominating Sun Prairie East 27-6 in a Level 3 monsoon. The offense struggled against Brookfield Central last week but the defense stood tall in a 7-0 shutout win. Can the Lasers get the offense going against a very good West De Pere team who's only loss was against Bay Port. Other than the 34 points given up in that Week 9 game, the Phantoms have limited opponents to single digits six of the last seven games. The offense features All-State running back Najeh Mitchell, who is very versatile out of the backfield.

After eight state finals trips from 1986 to 1996, including five championships, Monroe is back at Camp Randall for the first time since a runner-up finish in 1996. It's the same formula as those Pat Martin-coached teams, as the Cheesemakers feature a dominating multi-faceted rushing attack that averages 397 yards per game. They'll provide quite the challenge to West Salem's stout defense, which hasn't allowed more than 14 points in any game this season. The Panthers are coming off a 37-14 win over Onalaska, the only team to defeat them earlier in the year.

Catholic Memorial has won three straight state titles, including the last two in Division 4. The Crusaders opened the year with a win over defending Division 1 state champion Franklin and also beat defending D3 champ Pewaukee, but struggled to put away teams at times, including last week in a 20-14 win over Two Rivers. Columbus has the kind of talent that can push CMH, like Two Rivers did last week and Ellsworth did in last season's state title game. The health of Columbus junior two-way star Colton Brunell, who left last week's game late with injury, will key for the Cardinals. He has rushed for more than 2700 yards this year with 41 rushing touchdowns.

This is a rematch of last year's Division 5 state title game, which Aquinas won in the game of the state finals 28-26 when the Blugolds stopped a late Mayville two-point conversion attempt that would have tied it with less than two minutes left. Mayville running back Blake Schraufnagel ran for more than 200 yards in that one, and is having another huge senior season, going over 2000 yards for a second straight year. Aquinas relied on the passing game a lot last year and in the early part of this season, but the Blugolds have shown off a powerful rushing attack in recent weeks that should bode well in Thursday's cold.

Stratford played a thriller with Saint Mary's Springs last week, holding off the Ledgers 20-14 in overtime to advance to the state title game for the first time since an unbeaten and dominating 2019 squad was upset by Lake Country Lutheran in the D5 championship. According to the WIAA records, Stratford is the first team to play for a state title with a tie on its record, as the Tigers tied with Mosinee early in the year due to weather issues. Mondovi had a thriller of its own last week, rallying with a late touchdown to defeat Darlington 14-7. The Buffaloes are making their first state title game appearance since 1990, when they were the Division 4 runners-up to Columbus, who is also making its first trip to Madison since then.

Shiocton joins CWC-Large mate Stratford at the state finals, as the Chiefs benefit from the "dropdown effect", playing tough, larger competition in the conference and then moving to Division 7 for the postseason, where they have beaten defending champ Reedsville, unbeaten Cambria-Friesland, and unbeaten Cashton in successive weeks, despite just one First Team All-Conference player, fullback/tight end Dylan Herb. Regis has been pegged as the favorite in Division 7 all season, and the incredibly deep and talented Ramblers have not disappointed. Other than a 13-6 opening win over Prescott, the team has won every game by at least 23 points, including a 53-8 win over Edgar and 43-7 decision over Bangor in the playoffs.