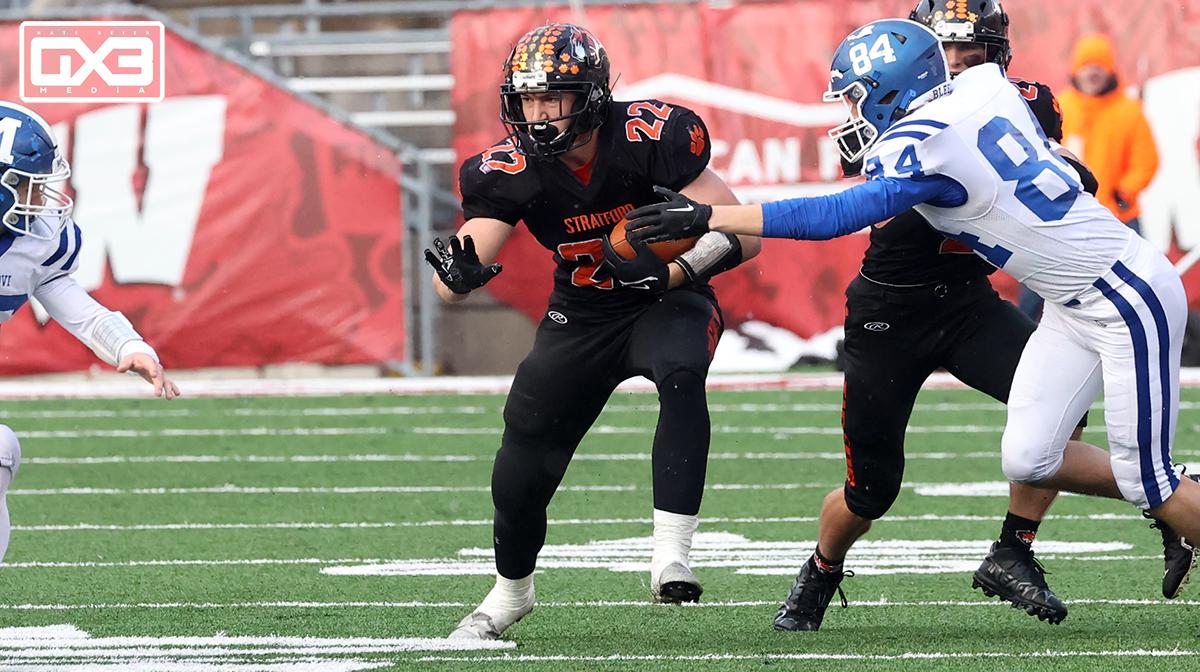 It was a bit wild and wacky at times, but ultimately Stratford closed things out for a 32-14 victory over Mondovi to claim the 2022 WIAA Division 6 state championship. The victory gives Stratford eight state titles in program history, and first since a run of six straight ended in 2008, to go with a pair of runner-up trophies.

Stratford jumped out to a 6-0 lead, scoring on its first possession when Braeden Schueller hit Gavin Leonhardt for a 23-yard touchdown.

Mondovi appeared to have a big play when Jake Linse intercepted a Schueller pass in the second quarter, but he fumbled the ball and after a review, it was ruled Stratford recovered in-bounds to get the ball right back. On the ensuing series, Koehler Kilty went in for a three-yard touchdown to put the Tigers up 13-0.

Mondovi responded with a solid drive, with quarterback Jarod Falkner goin in from a yard out to get the Buffaloes on the scoreboard just before halftime.

Getting the ball after halftime, Mondovi embarked on another scoring drive and took a 14-13 lead on Stratford with 8:10 left in the third quarter as Falkner hit Cade Fremstad for a juggling catch from 36 yards out.

While Stratford would total just 55 yards in the fourth quarter, the Tigers scored twice to stretch out the lead and held Mondovi in check to claim the title.

Koehler Kilty ran for a game-high 192 yards and three touchdowns on 35 tough carries. Braeden Schueller made up for a pair of interceptions with a pair of touchdown passes as well.

The Mondovi rushing game struggled, going for just 83 yards on 30 carries, though quarterback Jarod Falkner had a nice day with 144 passing yards and a touchdown. Cade Fremstad hauled in four passes for 110 yards and a score.