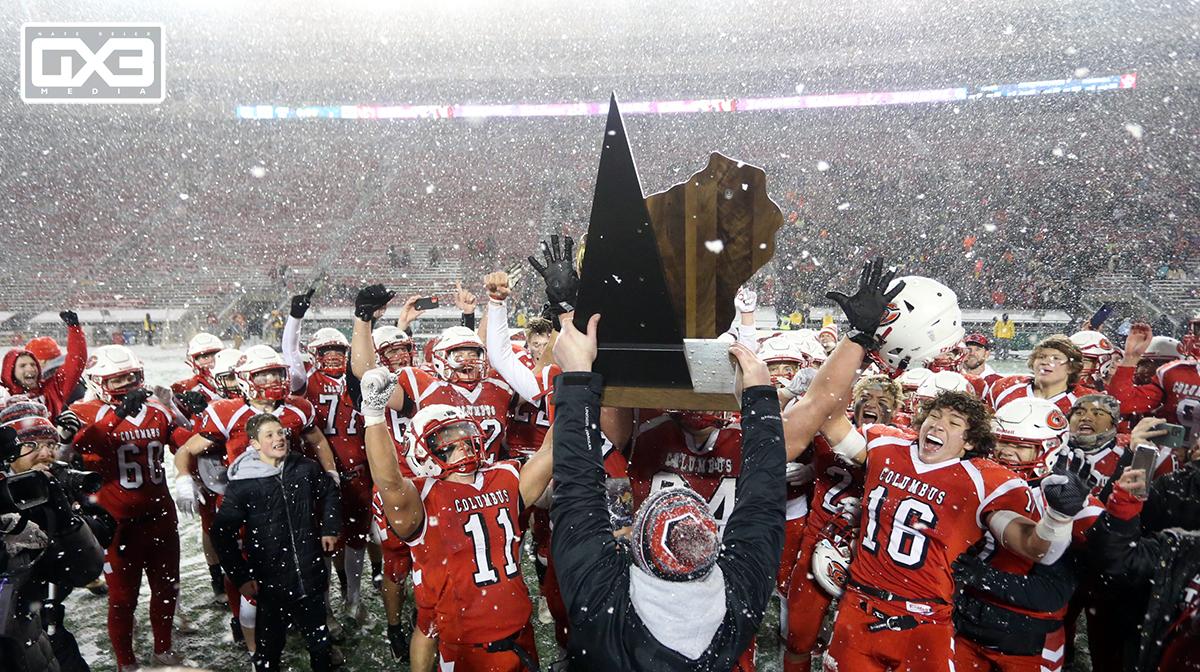 Columbus stood tall with the mighty three-time defending state champion Catholic Memorial Crusaders, and in the end, the Cardinals pulled off the shocker 23-21 to win the WIAA Division 4 football state championship.

While both teams entered unbeaten, Catholic Memorial was the heavy favorite as the D4 state champ the last two years (plus a D3 title in 2018) and picked by all of our staff and media partner panel to win it all.

However, Columbus served notice right away that they would not be intimidated, forcing Catholic Memorial into a three-and-out on the first drive of the game. While neither team could get on the scoreboard in the first quarter, it was clear it would be a dogfight until the end.

Columbus struck first, scoring on a three-yard touchdown run by junior All-State running back Colton Brunell. After being bottled up early on, with minus-three yards on his first seven attempts, Catholic Memorial junior All-State running back Corey Smith broke off a 61-yard touchdown, somehow getting out of a tackle attempt by Brunell that saw Smith flung around 360 degrees.

Smith would add another touchdown run with several broken tackles to put Catholic Memorial up 14-7 with just 1:12 left in the first half, but it wasn't the end of things before the break.

Columbus marched quickly down the field and scored on a three-yard throwback pass from Nathan Cotter to Jefferson Mobry with just three seconds remaining in the half.

The Cardinals got the opening kickoff of the second half as well, and marched 65 yards in seven plays to take a 20-14 lead, though the extra point was blocked. 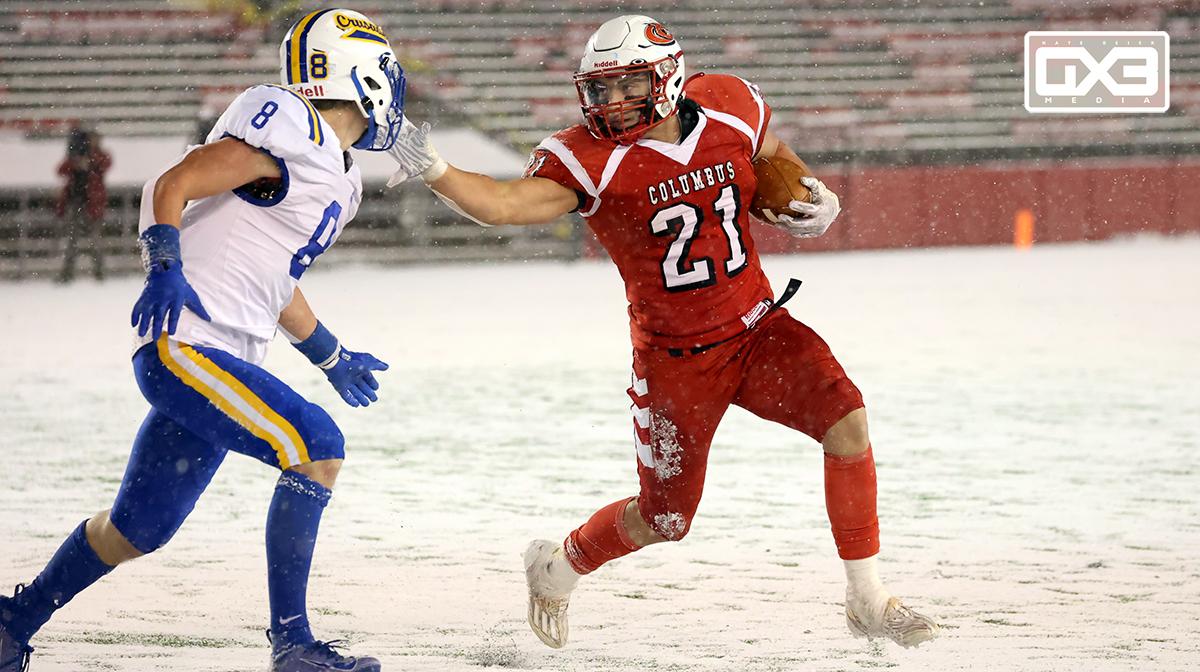 Catholic Memorial wasn't done yet, with Isaiah Nathaniel hitting a wide open Bennett McCormick for a 49-yard touchdown after the Crusaders had stopped a Columbus fourth-down attempt just a play earlier.

It remained 21-20 in favor of Catholic Memorial into the fourth quarter, when Columbus went on a 6:35 scoring drive that covered 65 yards in 11 plays. The drive stalled out in the red zone, however, and with the snow falling in a picturesque Camp Randall Stadium, Corbin Hynes delivered the kick of his life, just getting enough on a 31-yard field goal attempt to clear the crossbar to put Columbus ahead 23-21.

Catholic Memorial would get two more cracks at it, but fumbled the ball away with less than four minutes remaining and saw a last-gasp drive in the final minute end when a deep pass from Nathaniel to Corey Smith fell incomplete, as Columbus kneeled once to secure the victory.

Colton Brunell of Columbus ran for 186 yards and two touchdowns on 38 carries, finishing his season with 2,897 yards on the ground with 43 touchdowns. His yardage total places him fifth on the state's single-season list, and he is over 5000 yards in his career with a full season yet to play.

Nathan Cotter completed eight-of-ten passes for Columbus, throwing for 92 yards and a touchdown. 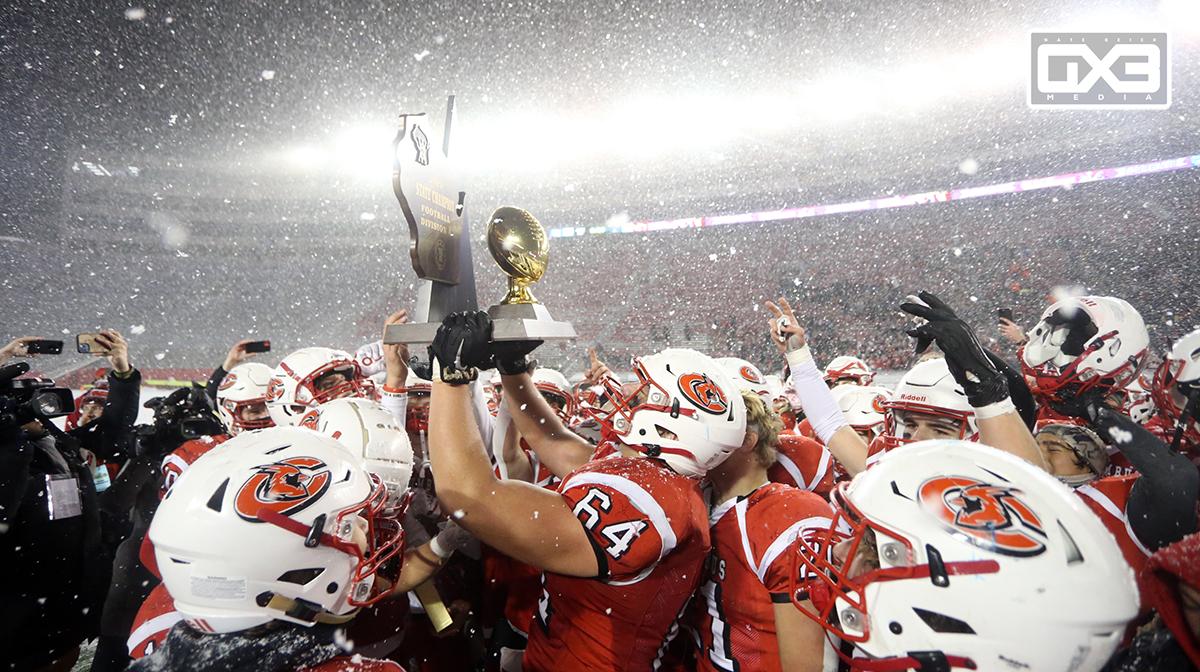 While 14 of his 17 carries went for five yards or less, Corey Smith finished with 95 yards and two touchdowns on the ground. He added a 34-yard catch as well. Isaiah Nathaniel completed nine-of-16 passes for 142 yards and a touchdown.

Third downs were a key factor in the game, as Columbus converted eight-of-14 while Catholic Memorial was just three-for-10, and one-for-five on fourth down.