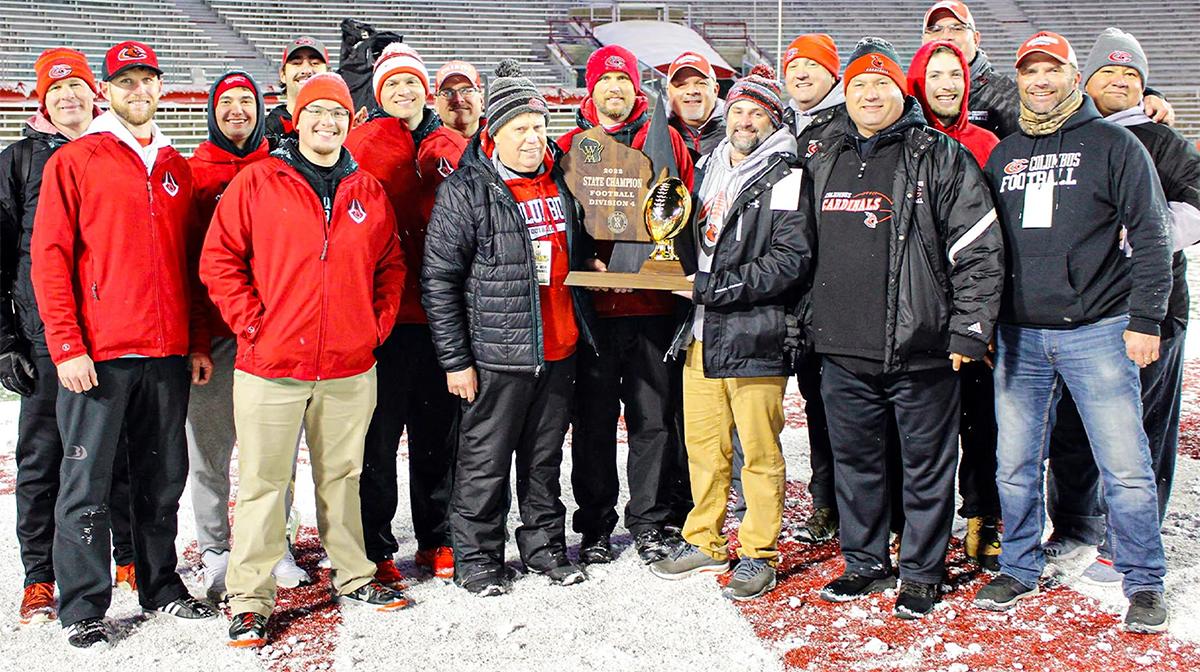 In just his second year as head coach of the Cardinals, Selgrad and his team brought home a state football title. On Nov. 17, Columbus completed a perfect 14-0 season with a 23-21 victory over Catholic Memorial in the WIAA Division 4 State Championship at Camp Randall Stadium in Madison, Wis. Trailing by just one point entering the fourth quarter, with the snow coming down, senior kicker Corbin Hynes kicked the go-ahead field goal with under five minutes to go in regulation. The Cardinals defense then prevented Catholic Memorial from scoring and brought home the third state championship in program history. After losing to Catholic Memorial in Level 4 of last year's playoffs, Selgrad and his team had redemption on their minds when both teams entered this year's contest undefeated.

"It took a lot of work and dedication from the players and our coaches," Selgrad said. "After we lost to Catholic Memorial last season, we got a taste of what needs to happen to be a successful program. We had a really good season last year, too, but we just came up short. The guys, the players, the coaches, everybody knew that we had to work harder, we had to get stronger, more physical. And then we had to really dedicate ourselves to be not only excellent technicians, but we also had to have the right mindset to make it through a 14-game season. We preached that from Day 1, 'we want to have a 14-game season.' So, we really worked hard to improve every week, and my motto has been, 'Keep Building.' Every week we wanted to get better, we wanted to improve and never be satisfied with yesterday. All those things together really set the groundwork for our season."

Selgrad grew up in Rosendale, Wis., and graduated from St. Mary's Springs Academy, where he participated in football and baseball. As a member of the Ledgers, he played cornerback and running back under Coach Bob Hyland. Following high school, Selgrad went on to graduate from UW-Oshkosh in 2004 and receive his master's degree from Marion College in 2006. Selgrad's coaching career began at his high school alma mater, St. Mary's Springs, in 1998 as an assistant coach. He then took an assistant coaching position from 2008 until 2009 at North Fond du Lac High School. In 2013, he coached at Fond du Lac High school as an assistant coach through the spring of 2021. Then in the fall of 2021, Selgrad took over as head coach of the Cardinals.

Selgrad is honored to be named this season's Coach of the Year and attributes it to everyone in the Cardinals' football program.

"First of all, it's humbling," said Selgrad. "To be chosen by your peers, it's humbling. You don't go into this business, for me personally anyways, to be recognized individually, so this is kind of a surreal thing. I'm one man, but it takes an entire staff to make this happen and I've got a fantastic staff around me. The support from the community, the parents, the players, this is just as much their award as it is mine. I think it's really a great reflection of what Columbus football is all about."

About the Green Bay Packers High School Coach of the Year/Week Program:

In recognition of the honor, the Packers will award a $4,000 donation to the Columbus football program from the Green Bay Packers, Buffalo Wild Wings, and the NFL Foundation. Selgrad will be honored at the WFCA All-State Banquet in the Lambeau Field Atrium. This marks the 25th year both the Green Bay Packers and WFCA have awarded the honor together. The WFCA has awarded a Coach of the Year since 1976, while the Packers have presented the same award since 1998, in addition to the Coach of the Week program. More information regarding this award, the All-State team and the WFCA is available at www.wifca.org.