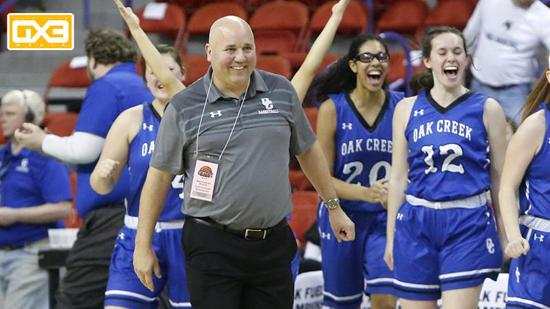 Coach Hluchnik is the 42nd coach in girls' basketball state history to achieve the milestone.

He is one of 12 active coaches with at least 400 wins in girls' basketball.

Coach Hluchnik built Oak Creek into a state power. He guided the Knights to the WIAA Division 1 state title in 2014, the program's first state championship. The Knights also made state tournament appearances in 2016 and 2018.

Coach Hluchnik is 277-69 (.800 winning percentage) in 13-plus years at Oak Creek. He guided the Knights to an incredible 135-game Southeast Conference winning streak that spanned 10 years.

Prior to taking over the program at Oak Creek, he was the head coach at West Allis Central where he had a 123-137 record in 12 seasons at the helm.

His top player in his time at West Allis Central was Mehryn Kraker, who played collegiately at UW-Green Bay and drafted by the Washington Mystics in the 3rd Round of the WNBA Draft.