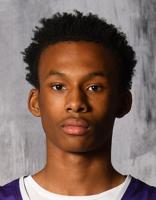 Slicing through the Sun Prairie East defense like a veteran delicatessen worker, senior Rico Yarbrough erupted for 48 points Monday evening to lead visiting Beloit Memorial to a 74-63 victory over the Cardinals in a Big Eight Conference makeup contest.

The 6-foot-6 Yarbrough weaved his way in and around opposing defenders to finish time and again at the rim. He also tossed in four dunks, grabbed 16 rebounds and made a three-point shot en route to his career-best scoring total.

Yarbrough got off to a quick start, scoring six of the Knights' first eight points. By halftime, he was up to 27 points and Beloit led 37-26.

Sun Prairie East made a strong early second-half run at Beloit, but Yarbrough and Co. responded with a flurry of their own and held on to record their third victory in their past four outings.

Yarbrough gets help from teammates

Farr had 12 points and several assists to Yarbrough while Hereford and Karl combined for 10 points.

"Fazion has really been a leader for us," first-year Beloit coach Todd Marks said. "He's an extension of our coaching staff and he's been a great leader for our younger guys, especially Amare."

Understandably, Marks had high praise for Yarbrough, who entered the game coming off recent 26 point outings against both Madison West and Hononegah, Ill.

"Rico has been a sparkplug for us all year," Marks said. "His ceiling is through the roof. He's just beginning to scratch the surface of how good he can become. The last couple of games, he's been in the 20s for us.

"Tonight, he continued to attack the basket and didn't settle for outside jump shots. He's an eager player who wants to learn and get better."

Yarbrough played just a handful of games for Beloit as a junior, but has emerged as a legitimate first-team all-Big Eight Conference performer during his senior season.

"He diced us up and did whatever he wanted to," Sun Prairie East coach Steve Maselter said of Yarbrough. "He played so hard and so well tonight that no matter what we did, he was able to finish."

Marks said several collegiate programs have recently reached out to inquire about Yarbrough, who would like to continue playing basketball at the next level.

Beloit improved to 3-10 on the season entering games this week against Verona and Janesville Craig.

"It's nice to get our third win in four games," Marks said. "It's huge for the morale of our kids. We are trying to instill positive things into our program and our kids have really responded.

"Even when we were 0-8, they kept trying to do the right things. But we also know how tough our league is. I'm not naive about what is ahead of us."

Coming off its biggest win of the season, Sun Prairie East had the chance to continue its positive momentum Monday against Beloit.

But instead of extending its winning streak to three, the Cardinals came out flat and suffered their 11th loss in 14 games.

"Coming off the big win over Madison East Saturday, our kids felt pretty high," Maselter said. "We didn't come out tonight with the right mindset. I think we might have taken tonight a bit for granted."

Beloit led by as many as 14 in the first half and went into intermission with an 11-point advantage.

Sun Prairie East came out with much more energy in the second half and managed to quickly cut the margin to six points at 39-33. The Cardinals then cut into Beloit's lead some more before Beloit responded with a run of its own to all but end the outcome.

Sophomore Trystan Fry (6-1) had 14 points and a pair of three-point baskets to lead the Cardinals while junior Theo Schofield (6-6) also reached double figures with 11 points. Sophomore Max Glusick (5-9) drilled two triples and had 10 points for the Cardinals.

"Trystan's decision making is very good," Maselter said. "He's shooting it well and he can also get to the rim."