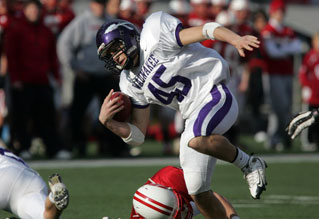 Wisconsin Sports Network and WisSports.net are proud to announce Waunakee's Leo Musso as the 2011 recipient of the Elroy "Crazylegs" Hirsch Award as the most outstanding senior running back in Wisconsin, part of the WSN Senior Football Awards presented by Taco Bell.

If Musso played all four quarters every game his numbers would be even more eye-popping, but as it is the Warriors have been one of the most dominant teams in the state and he rarely sees the field in the fourth quarter. Just five times this year has he carried the ball more than 20 times. Still, he's managed to rush for 2201 yards and 35 touchdowns on just 250 carries and is one of the biggest breakaway threats in the state.

Well-built with outstanding balance, Musso has good power to run inside and is a threat to take it to the house if he gets the smallest opening. This is his second straight 2000-yard season and Waunakee is going for a third straight Division 2 championship.

Finalists for the award were Musso, Bryar Harper of DeForest, Devon Linzenmeyer of Ozaukee, Joe Schobert of Waukesha West, Alex Schuh of Kimberly, and Adam Vesterfelt of Janesville Parker.