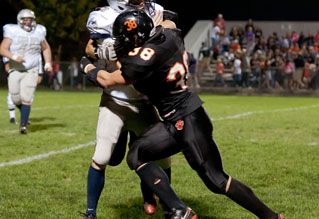 Wisconsin Sports Network and WisSports.net are proud to announce Marshfield's Trevor Peterson as the 2011 recipient of the Tim Krumrie Award as the most outstanding senior defensive lineman/linebacker in Wisconsin, part of the WSN Senior Football Awards.

Peterson has been one of the most disruptive players in the entire state this year, using his outstanding size, athletic ability, and instinct to take over games from his defensive end position. He was a First Team All-Conference choice in the VFA-South and the league's Defensive Lineman of the Year.

In seven conference games Peterson recorded 4 fumble recoveries, with three of them going for touchdowns. He also returned an interception for a touchdown for the Tigers. Two of those scores came in a Week 8 win over Menasha when he terrorized the Blue Jays with a two-yard fumble recovery for a touchdown then returned fumble 75 yards for a score later in the game. During the regular season he totaled 11.5 sacks and 55 tackles.

On Monday Peterson was named to the First Team All-State list by the Wisconsin Football Coaches Association.

Finalists for the award were Peterson, Trent Denlinger of Cuba City, Roland Dunlap of Muskego, Justin Montanez of Milwaukee Riverside, and Nick Severson of Waunakee.