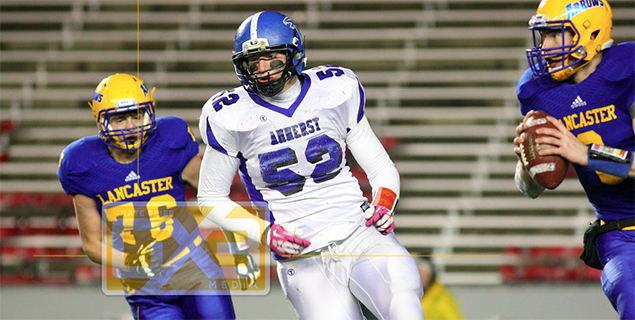 Wisconsin Sports Network and WisSports.net are proud to announce Amherst's Tyler Biadasz as the 2015 recipient of the Tim Krumrie Award as the most outstanding senior defensive lineman in Wisconsin, part of the WSN Senior Football Awards.

A beast on both sides of the ball, Biadasz was a WFCA First Team All-State choice at outside linebacker last year, moving to the defensive line this season, where he was again an All-State selection.

He has an impressive blend of size, athletic ability, and potential, something the University of Wisconsin saw this spring in offering a scholarship, which he accepted.

As a senior, he has 53 tackles, 9 tackles for loss, 4 sacks, 3 forced fumbles, an interception, and two defensive touchdowns, despite rarely playing in the second half of Amherst blowout victories.

“He has great feet, which separates him from everyone else,” said head coach Mark Lusic. “Teams game plan for him defensively. He plays wide side every play, and teams run away from him and when they challenge him, it usually does not work out the for opposing team.”

Finalists for the award were Zach Angle of Oshkosh North, Trayvonn Johnson of Verona, Aaron Maternowski of Slinger, Josh Mueller of Homestead, and Zack Taylor of Catholic Memorial.