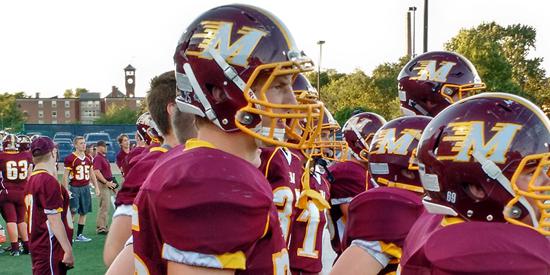 Wisconsin Sports Network and WisSports.net are happy to announce Menomonie's Mason Stokke as the 2015 recipient of the John Anderson Award as the most outstanding senior linebacker in Wisconsin, part of the WSN Senior Football Awards.

A two-way phenom, Stokke recorded 151 tackles, 22 tackles for loss, 2 sacks, recovered 5 fumbles, forced 3 fumbles, and had 3 interceptions for the Mustangs this season. An undefeated state champion wrestler last year, he is also a standout running back, going for more than 1400 yards this season.

Not surprisingly, he was a two-way WFCA All-State selection, including the WFCA Defensive Player of the Year.

“He is the toughest player I have ever coached both physically and mentally,” said veteran head coach Joe LaBuda.

Stokke gave a verbal commitment to Wisconsin earlier this year.

Finalists for the award were Stokke, Jacob Erbs of Reedsburg, Ross Kennelly of Superior, Alex Orvis of Madison La Follette, Zach Steuck of Lodi, and Zach Turner of Stanley-Boyd.