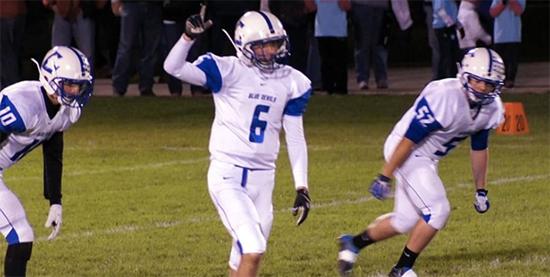 Wisconsin Sports Network and WisSports.net are proud to announce Garret Wegner of Lodi as the 2015 recipient of the Kevin Stemke Award as the most outstanding senior kicker or punter in Wisconsin, part of the WSN Senior Football Awards.

Wegner is the latest in a long line of successful kickers at Lodi that includes 2012 Kevin Stemke Award winner Donnie Manke. He averaged 40.5 yards per punt this season for the Blue Devils, as well as 60 yards per kickoff. Of his 56 kickoffs, 31 were touchbacks.

He went 6 for 10 on field goals during the regular season, with two made field goals of more than 40 yards. He was 39 of 40 on extra points. In the playoffs, he made 5 field goals in a Level 3 win over Columbus to tie the state record, including the game-winner. His 12 made field goals this year is in the top ten in state history.

Finalists for the award were Wegner, Alex Bray of Catholic Memorial, Nathan Gennrich of Franklin, John Mack of Arrowhead, and T.C. Swittel of Brookfield East.