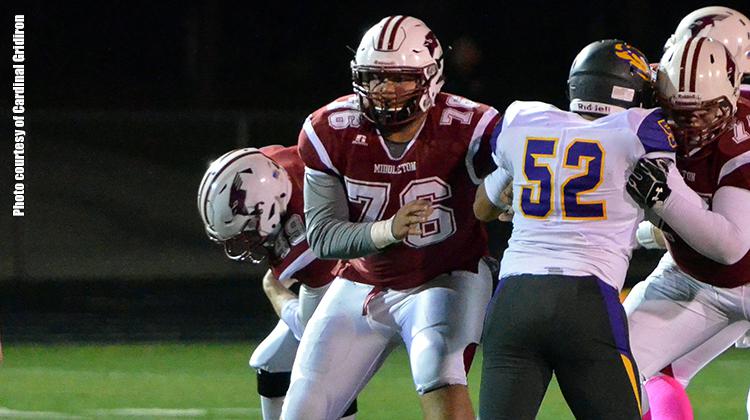 Wisconsin Sports Network and WisSports.net are happy to announce Middleton's Kayden Lyles as the 2016 recipient of the Joe Thomas Award as the most outstanding senior offensive lineman in Wisconsin, part of the WSN Senior Football Awards.

Lyles' family made the move from Arizona to Wisconsin with his family this summer. Kayden had offers from a Who's Who of college programs, but gave a commitment to Wisconsin last year.

Ranked among the top players in the entire country, he is a dominating presence up front, moving around the Cardinals' offensive line this year, settling in at center. The Big Eight Lineman of the Year, he's been an instant impact for Middleton.

"He is absolutely dominating, and has a complete game -- run blocking, pass blocking, pull and trap blocking, etc." said head coach Tim Simon. "He has exceptional technique and is very athletic (not just a big strong young man)."

The award is named after Joe Thomas, a graduate of Brookfield Central High School now playing in the NFL with the Cleveland Browns. Thomas was a three-sport athlete in high school, lettering all four years in football, basketball, and track and field while also being named to the Honor Roll all four years. He started 37 games at left tackle for the Badgers and won the Outland Trophy after his senior season. Thomas was drafted 3rd overall by the Browns in 2007, and has been selected to the Pro Bowl each of his first seven seasons.