From the Hip: #MyReasonWhy high school sports are important and what they've meant to me

The following article was originally published in NOW Newspapers under the "State of Play" feature, a series of bi-weekly feature columns penned by WSN General Manager Travis Wilson. 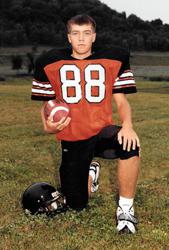 The Wisconsin Interscholastic Athletic Association in partnership with the National Federation of High Schools recently launched a #MyReasonWhy campaign to highlight the benefits to high school sports and activities participation and share positive stories and memories from student-athletes, parents, coaches, officials, and more.

The initiative by the WIAA and NFHS is a great reminder about what makes high school athletics so special, but also a reminder about why it is so important to continue the investment in these activities, even in the challenging budgetary times in the state of Wisconsin.

High school co-curricular activities, which includes not only athletics but also music, drama, speech, debate, etc., make up only one to three percent of most high school budgets. Yet the return on those investments is immense. In the 2014-15 school year, Wisconsin Department of Public Instruction data shows that 44.3% of all students participate in athletics, 19.4% participate in extracurricular music opportunities, and 36.9% are involved in some form of extracurricular academic program such as speech or debate.

Let’s think about that for a second. There is certainly some crossover for those young people that are involved in more than one activity, but one to three percent of most school budgets impact well over 50% of the students. Yet when budgets are short, it is often those same highly-impactful opportunities that are the first to get cut or reduced.

I’m certainly not saying that these programs should be retained in favor of cutting teachers or staff, nor that everyone should run out and put turf on all athletic fields, build indoor training facilities, or invest in multi-million dollar auditoriums, but considerations should be made to continue and expand extra-curricular opportunities whenever available.

Because the benefits, especially as related to high school sports, are overwhelmingly positive.

Multiple research studies compiled by the NFHS point to significant academic and personal achievement by student-athletes. A study of nearly 140,000 high school students in Kansas showed that, “athletes earned higher grades, graduated at a higher rate, dropped out of school less frequently, and scored higher on state assessments than did non-athletes.”

A 2007 study showed that participation in school-sponsored athletics is associated with a two percent increase in math and science test scores. A survey of 300 Minnesota high schools by the Minnesota High School League in 2001 found that the average GPA of all student-athletes was 2.84, compared to 2.68 for those that do not participate in athletics. Other studies show significant disparities in missed school days, dropout rates, and graduation rates between those that participate in high school athletics versus those that do not.

Sports participation has shown to benefit students that transition from middle school to high school, increase the sense of belonging and engagement in school, and promote life-long physical fitness. High school athletes are less likely to carry a weapon, smoke cigarettes, exhibit suicidal behavior, use illegal drugs, or drink alcohol.

These research studies are wide-spread, and nearly unanimous in pointing to the significant short-term and long-term benefits of high school sports participation. Of course, it is difficult to judge how much of the data is causational and how much is simply correlational, but it is impossible to overlook the positive role that athletics can play in schools.

This is all great data and metrics, and should be an important part of every school’s discussions around whole student education. But it can be impersonal. The WIAA’s campaign aims to make it personal, and this is #MyReasonWhy.

For as long as I can remember I have been interested in high school sports. As a youngster I recall driving all over the driftless area of southwest Wisconsin with my dad to watch my older half-brother Chet play in La Farge basketball games. It was one of the few connections we got to have with him. We also supported the varsity teams in my hometown of Richland Center, where I still remember walking into the Hornet Hive at the old school to head into the gym and watch Kerry Gulsrud, Brandon Bartels, Glen Brown, and many others hoop it up. Friday nights in the fall meant heading to the horrible field conditions at Krouskop Park, where there was no drainage and the baseball diamond encroached in the east end zone, to watch Coach Avitus Ripp lead the Hornets and Monte Schmidt, Jamey Gander, Derek Ripp, Joel Hornby, Ed Machovec, and many others.

Like so many elementary and middle school kids, that’s who I wanted to be. I looked forward to finally donning the Hornet jersey. When I got my chance, it created some of the fondest memories of my lifetime. As a three-sport starter in football, basketball, and baseball, each season brought with it new challenges and new opportunities.

Basketball was always my first love, and the sport I dedicated myself to the most. Yet baseball, with it’s laid-back pace and less intense atmosphere, was probably the one I enjoyed the most. Football brought the most intense feelings, especially when our junior and senior regular seasons ended with close losses to Platteville.

However, nothing can compare to the heartbreak of walking off the basketball court for the final time after a playoff loss to Portage. I held it together pretty well until my dad came up to me on my way to the locker room and gave me a hug, an interaction that brings a swell of emotions (and tears) to this day, even as I write this. Sitting in the locker room for 45 minutes after the game, I was overwhelmed by the finality of it all. After playing with this extremely close group of friends since 5th and 6th grade, I knew we’d never be together in that environment again.

I remain in contact with many of my former teammates, but as so often happens, life has a way of getting in the way, and weekly chats turned into a few times per year conversations. Still, there is a connection you build after so many hours of working towards the same goal that cannot be replaced. I know that if I ever needed them, my teammates would be there for me, as I would be for them. This camaraderie is often cited as the most important thing many athletes get out of high school sports. The ability to spend time with friends builds lifelong bonds.

High school sports also taught me about success, and how to handle it, but also about failure, and how to handle it. It goes well beyond just winning and losing games. As a junior, I thought I would be a key contributor on the basketball court, but I found myself the ninth person in a primarily eight person rotation. I was frustrated, disappointed, angry. But I knew for my situation to change, those sentiments would not help me. I needed to channel them into something positive, which was working my tail off to prove my coach wrong. As the year went on, I tried as hard as I could to make my mark in practice, with a goal of being better than the starter I was guarding. It wasn’t as much as I’d hoped, but I did see a few more meaningful minutes as the year went along. The next season, while not a starter right away, I played a lot and was in at the end of all games, which I always felt was the most important thing anyways. By mid-season, I was a starter.

Bearing down even in the face of adversity, working hard, and getting better were things I learned foremost in high school athletics, and I hope they continue to be positive traits to this day.

Leadership was another key component of my sports education. While not the best or most-gifted player on any team, I was always involved in trying to make the team better. It might not have been as a vocal leader in the beginning, but I felt my work ethic was something I wanted to exhibit and hopefully try to influence others with.

Early in high school I knew that I wanted to be a coach and a teacher. I sought out opportunities to be involved in the youth programs, and while I knew I wasn’t necessarily a college-level athlete, I looked to be involved there as well. Serving as a student assistant coach at Mount Mercy College, where I earned degrees in U.S. and World History along with Secondary Education, put me in a position to contribute as a varsity assistant basketball coach at my alma mater Richland Center after graduation. I later spent three years as the head men’s basketball coach at UW-Richland and officiated a significant number of games in basketball, football, baseball, and softball in the area, mostly in the lower levels.

As a player, coach, official, and now as a member of the media, I’ve had the somewhat unique opportunity to see all aspects of the high school sports experience, and it continues to solidify the idea that athletics in schools are significant positives, participation should be encouraged wherever possible, and that my own experiences in high school sports have and continue to pay dividends in many areas.